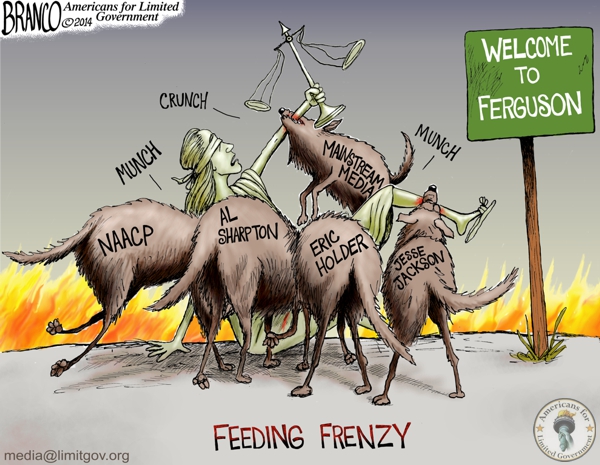 America, under the failed leadership of its First Post-Racial President, continues to be anything but Post-Racial.

Police Officer Daniel Pantaleo, a 29-year-old, eight-year veteran of the force, faced possible charges in the July 17 death of Eric Garner, who was stopped on suspicion of selling loose cigarettes. Video captured Pantaleo using what appeared to be an illegal chokehold on Garner, a 43-year-old father of six with a lengthy criminal record. Garner, who had health problems, died as a result of the encounter.

In the video, Garner can be heard yelling, “I can’t breathe!”

Jonathan Moore, an attorney for the victim’s family, said he is “astonished by the decision.”

In a statement, New York City Mayor Bill de Blasio said Wednesday was “a deeply emotional day” and called for any protests to remain peaceful.

President Obama, speaking at the Tribal Nations Conference in Washington after the grand jury’s decision was announced, said many minority communities across the United States feel that law enforcement is not working with them “in a fair way.”

By mid-afternoon, protests began to bubble up around the city. A Twitter hashtag,#ShutItDown, called on demonstrators to protest Wednesday night’s annual Christmas tree lighting ceremony at Rockefeller Center in midtown Manhattan. A “lie-in” was held at the main concourse of Grand Central Station in Manhattan, though MyFoxNY.com reported that protesters were not blocking commuters and no arrests were made.

And now, we pause, for this moment of truth…and sanity.

Speaking to CNN on Tuesday, Barkley stated that if it wasn’t for police, the ghetto would be like the “wild, wild west.”

“The notion that white cops are out there just killing black people – that’s ridiculous. That’s just flat-out ridiculous,” the TNT basketball analyst told CNN. “I challenge any black person to try to make that point. Cops are actually awesome. They are the only thing in the ghetto between this place being the wild, wild west. So this notion that cops are out there just killing black men is ridiculous and I hate that narrative coming out of this entire situation.”

Barkley previously had strong words about the violent protesters in Ferguson, calling them “scumbags” for looting and setting businesses on fire after officer Darren Wilson was not indicted in the death of Michael Brown. He told CNN the only time America discusses race is when something bad happens.

“We’ve always had a racial issue in this country and the biggest problem with it is we never discuss race until something bad happens. We never have meaningful dialogue over a cold beer when things are going good,” Barkley explained to CNN. “When something bad happens, everybody has a tribe mentality. Everybody wants to protect their own tribe, whether they’re right or wrong.”

Barkley stated that there’s a reason why police racially profile the black community.

“We as black people, we got a lot of crooks. We can’t just wait until something like this happens. We have to look at ourselves in the mirror,” Barkley told CNN. “There’s a reason they racially profile us at times. Sometimes it’s wrong, sometimes it’s right. To act like we hold no responsibility for some of this stuff is disingenuous.”

Barkley also said that there needs to be stronger black leaders, and not the same case of “sad characters.”

“Every time something happens in the black community, we have the same cast of sad characters. We don’t have to have Al Sharpton go there.”

Barkley continued: “We need some strong black men in St. Louis to stand up and say ‘Hey, let’s handle this situation.’”

Hundreds of protesters around the country have been arrested following last week’s grand jury announcement. The presence of police and National Guard in the Ferguson area has been scaled back following violent protests.

Back in the 1970s, one of my favorite television shows was “Baretta”, starring Robert Blake. Beretta was a no-nonsense New York City Plain Clothes Cop, who wore a jaunty hat, blue jeans, and a short sleeve sweatshirt, and had a cockatoo named Fred.

The title song, “Keep Your Eye on the Sparrow”, was performed by Sammy Davis, Jr.

The catchphrase to the song, which became popular nationwide, was, “If you can’t do the time, don’t do the crime.”

It meant that if you cannot take responsibility for your actions, then perhaps you should not do something illegal in the first place.

Perhaps someone should have instructed the two young men, who were killed in these unfortunate incidents in Ferguson, Missouri and New York City, as to the difference between right and wrong, and the importance of taking responsibility for one’s actions.

I find it very ironic, that the same protesters who are screaming and shouting at the top of their lungs that there is a different standard for black Americans and white Americans, in terms of dealing with our legal system, are the same ones who are expecting to be treated differently, and to have some sort of special privilege, that excuses them from unlawful behavior and the consequences of their own actions .

When you break our laws, you just cannot expect to get away scot-free. You should expect that there will be consequences for your actions. That is, unless you have broken into this country, as I wrote about yesterday.

In their quest to create a Socialist Utopia, where everyone is the same, and there are no overachievers or underachievers , the Obama Administration and their sycophants have actually set the stage for the chaos and animus regarding race relations that is gripping our country.

Without respect for our legal system, and for those in authority, whose job it is to enforce our system of laws, a civilized society can quickly evolve into a scene from Lord of the Flies, where the most barbaric will have the most power and privilege. In other words, rule by intimidation.

As is presently happening in my hometown of Memphis Tennessee, the Obama White House finds itself in the trap of its own making. By promising Americans that they will take care of everything from cradle to grave, Obama and his administration, like other administrations before them, have “freed” parents from their duties, creating a generational cycle of neediness, lawlessness, and disrespect for authority.

The Bible tells us that we reap what we sow.

Obama has sown class warfare and racial division… and now, America is reaping the results.