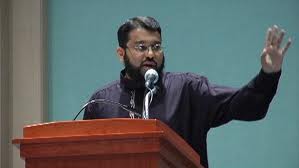 A news story hit over the weekend that an Islamic Preacher (Imam) in my hometown of Memphis, TN preaches that

Jews and Christians are filthy. Their lives and property can be taken in Jihad by the Muslims.

…I have been commanded to fight the people until they testify la illaha illa Allah [there is no god but Allah].

So…who is this Muslim Hatemonger?

Yasir Qadhi is not only a Memphis Imam, but is is also the Dean of Academic Affairs at the Al-Maghrib Institute. He is a hafiz (has memorized the Qur’an) and he has an M.A. in the Islamic Creed and a B.A. in Islamic Sciences from Islamic University of Medina, as well as a master’s and a doctorate in Islamic Studies from Yale. During a lecture on Shirk, or polytheism, Yasir Qadhi said that Jews and Christians are mushrikoon, or polytheists, because they have made partners with Allah. From Yasir Qadhi’s perspective, only Muslims are monotheists.

Let’s look a little deeper at the Al-Maghrib Institute, shall we?

The Michigan-based Al-Maghrib Institute is a college-level religious education program whose mission is to help its students “gain a deeper understanding of Islam”; to “build sincere, dedicated and brilliant students … who will go on to become leaders, bringing their communities to new heights”; and to “make people better Muslims and bring people closer to Allah.” The Institute seeks to achieve these objectives by offering “trademark double-weekend [six-day] university-style seminars carrying students toward a bachelor’s degree in the Islamic Studies.”

Characterized by Wahhabi-influenced extremism, rabid anti-Semitism, Holocaust denials, and the preaching of militaristic jihad, Al-Maghrib’s courses are accredited by American Open University (AOU), which in turn is accredited by Al-Azhar University in Cairo — the headquarters of the Muslim Brotherhood, the oldest and largest radical Islamic organization in the world.

A review of the course summary for Al-Maghrib’s Islamic Studies degree program shows that the required reading list is dominated by the works of Muslim Brotherhood and Wahhabi theologians and theorists. In particular, the program requires students to read Sayyid Qutb’s In the Shade of the Quran. Qutb, the Muslim Brotherhood thinker who was executed by Egyptian President Gamal Abdel Nasser in the 1960s, was influential in justifying terrorism and jihad, and in laying down the theoretical principles upon which al Qaeda was built.

Another Muslim Brotherhood theorist prominent in the Al-Maghrib curriculum is Sayyid Sabiq, who wrote his book Fiqh-us-Sunnah at the request of Muslim Brotherhood founder Hasan al-Banna. The two volumes of Sabiq’s work are the only texts for Al-Maghrib’s “Fiqh of Worship” course.

The Al-Maghrib reading list also features the works of Bilal Phillips, who in January 2007 gained notoriety as one of the radical preachers secretly videotaped for the Undercover Mosque investigative program aired on Britain’s Channel Four. In that program, Phillips was shown lecturing in favor of forced Islamic marriages for prepubescent girls.

The justification of jihad and a call for Islamic dominance are promoted in the Al-Maghrib course titled “Islam Invulnerable: The Making of the Modern Muslim World.” Tracing the rise of Islam as a global force from the initial Islamic invasions and occupations of the Near East, North Africa and the Iberian Peninsula, this class glories in the triumphs of the Ottoman, Safavid, Qajar and Mughal Empires. The Crusades are denounced, as are European “imperialist” and “colonialist” efforts in recent centuries, while Islamic conquests undergo “narrative reinterpretation” to explain how they differ from Western exploits. Moreover, the present-day Arab-Israeli conflict is blamed entirely on the “Zionists.”

And, what about the Tennessee Imam?

…Yasir Qadhi, who graduated from the Islamic University of Medina, draws from the anti-Semitic fogery, Protocols of the Elders of Zion, to explain that Jews are not racially Semitic and therefore have no right to make a claim on the Holy Land. A Holocaust denier, Qadhi has stated: “Hitler never intended to mass-destroy the Jews.” In August 2006 Qadhi revealed that he was on the U.S. Department of Homeland Security’s terrorist watch list.

To quote the late , great Claude Rains from “Casablanca”:

Almost one year ago, Tennessee Attorney General warned Americans against “hate speech” against Muslims. I wrote about it in a Blog titled, “US Attorney Warns Against Talking Mean About Muslims on the Internet”

Here’s the story from tullahomanews.com:

A special meeting has been scheduled for the stated purpose of increasing awareness and understanding that American Muslims are not the terrorists some have made them out to be in social media and other circles.

“Public Disclosure in a Diverse Society” will be held from 6:30 to 8:30 p.m. on Tuesday, June 4, at the Manchester-Coffee County Conference Center, 147 Hospitality Blvd.

Special speakers for the event will be Bill Killian, U.S. attorney for the Eastern District of Tennessee, and Kenneth Moore, special agent in charge of the FBI’s Knoxville Division.

Sponsor of the event is the American Muslim Advisory Council of Tennessee — a 15-member board formed two years ago when the General Assembly was considering passing legislation that would restrict those who worship Sharia Law, which is followed by Muslims.

Killian and Moore will provide input on how civil rights can be violated by those who post inflammatory documents targeted at Muslims on social media.

“This is an educational effort with civil rights laws as they play into freedom of religion and exercising freedom of religion,” Killian told The News Monday. “This is also to inform the public what federal laws are in effect and what the consequences are.”

Killian said the presentation will also focus on Muslim culture and how, that although terrorist acts have been committed by some in the faith, they are no different from those in other religions.

…Killian [also] referred to a Facebook posting made by Coffee County Commissioner Barry West that showed a picture of a man pointing a double-barreled shotgun at a camera lens with the caption saying, “How to Wink at a Muslim.”

Killian said he and Moore had discussed the issue.

“If a Muslim had posted ‘How to Wink at a Christian,’ could you imagine what would have happened?” he said. “We need to educate people about Muslims and their civil rights, and as long as we’re here, they’re going to be protected.”

“That’s what everybody needs to understand,” he said.

Killian said slide show presentations will be made.

Zak Mohyuddin, a Muslim Advisory Council member, said a shortened version of a documentary called “Welcome to Shelbyville” will also be featured.

The documentary, produced by the Public Broadcasting Service, spotlights recent demographic changes in nearby Shelbyville, with a focus on the growing number of immigrants from Latin America and Somalia with many Somalis from the Bantu minority ethnic group which practices Islam.

Mohyuddin said Muslims across the nation consistently issue press releases condemning terrorist acts, but the media usually does not pick up the information. He added that the apparent silence leaves the impression that Muslims do not condemn such acts.

Like Killian, Mohyuddin said word needs to be spread so more people understand the Muslim culture.

“It is in the self-interest of Muslims in the United States to counter violent extremism, because we and our children do not want to be viewed with suspicion,” Mohyuddin said. “The Muslim community is a vital resource in the fight against terrorism.”

Killian said he has made other presentations in the state about Muslim culture and civil rights laws, and the Muslims he’s become acquainted with are outstanding citizens.

“Some of the finest people I’ve met are Muslims,” he said, adding later: “We want to inform everybody about what the law is, but more importantly, we want to provide what the law means to Muslims, Hindus and every other religion in the country.

“It’s why we came here in the first place. In England, they were using Christianity to further their power in government. That’s why the First Amendment is there.”

First off…while I have met some very nice American Muslims, I have also delivered audio/visual equipment to a mosque where I was looked at as if they wanted to take a scimitar to my neck.

If Moderate Muslims are not behind their radical brethren’s eternal jihad against us infidels, they need to get their mugs in front of the cable news networks’ TV cameras and say so…because all I see representing them when I turn on the news, are the abrasive members of CAIR, blaming America for all the world’s troubles .

Secondly, about the First Amendment to the Constitution to the United States…

It protects my rights, also!!!

If Mr. Killian were to bring a case before the Supreme Court concerning a blogger being mean to Muslims, the court would require him to provide substantial justification for the interference with the right of free speech in his attempt to regulate the content of the speech.

You know what’s so great about our country? Our American Freedom. Earlier this week, we remembered those who fought and died, so that we could remain free.

It is that same American Spirit which fuels a lot of Conservative Bloggers, Mr. Killian. Including me.

If I write that it was a bunch of cowardly Saudi Arabian Radical Muslim Terrorists, who killed over 3,000 Americans, in the biggest Terrorist Attack ever on American soil, on September 11th, in the Year of  Our Lord Jesus Christ, 2001, my freedom of speech would protect me for making that statement, because it has been proven to be the truth.

And, if I then write that, I hope that, when they arrived at their ultimate destination, they became extra crispy and were immediately surrounded by their 72 virgins, who all looked like Nancy Pelosi and sang like Roseanne Barr, then that would be my opinion, and would still be covered by my Constitutional Right to Freedom of Speech.

The Constitutional Right to Freedom of Speech, as specified in the First Amendment, is unalterable and not subject to Political Correctness or Expediency.

If freedom of speech is taken away, then dumb and silent we may be led, like sheep to the slaughter.

So, this American, born of the Greatest Generation, intends to keep speaking his mind concerning those Radical Followers of Islam who want to kill us.

You see…I’m rather fond of my head. And, I intend to keep it.

3 thoughts on “The Tale of the Tennessee Imam: Of Hate Speech and Holy Wars”