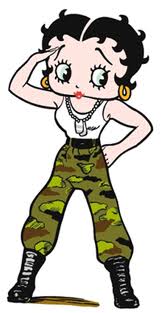 The subject of placing American Women in the military into combat roles has been a contentious issue, to say the least.

Beginning last year, the Administration decided that it would begin to place American Women into combat roles within our Armed Forces.

However, as with everything else that has been done to our American Culture, during the Obama Administration, is does not matter if the Administration’s Plan actually works. It only matters that they feel better about themselves for having implemented it.

On February 3rd, 2013, the President of the United States, Barack Hussein Obama, gave a live interview before the Super Bowl, during which he discussed the subject of Women in Combat.

President Obama defended the Pentagon’s decision to lift the ban on women in combat roles, saying that he had no hesitation sending female troops into harm’s way.

“Women as a practical matter are now in combat,” Obama said during a live interview Sunday on CBS before the Super Bowl. “They may not get treated as if they are in combat, but when they are in theater, in Iraq or Afghanistan, they are vulnerable, they are wounded and they’ve been killed.

“They have carried out their jobs with extraordinary patriotism and distinction,” he added.

Outgoing Defense Secretary Leon Panetta and Joint Chiefs Chairman Gen. Martin Dempsey last month lifted the ban on female servicemembers being in ground combat units, a move which could open up as many as 237,000 new positions to female troops.

The military services, though, have until 2016 to make the case for leaving some positions or occupations closed to women.

Obama said that female troops had shown that they could handle the rigors of military life. The president said there were already “extraordinary women in uniform who can do everything a man can.”

“One of my military aides is about 5-feet tall, probably weighs 100 pounds. You put a 50-pound pack on her and she can do things that you or me would keel over doing,” he added.

“The truth is that women are serving, they are taking great risks. What we should not do is somehow prevent them from advancing in an institution that we all revere,” said Obama.

Yes, Mr. President. Women are serving…and taking great risks. However, what happens if a woman is not physically able to lift the weaponry that she will be called upon to use in combat?

More than half of female Marines in boot camp can’t do three pullups, the minimum standard that was supposed to take effect with the new year, prompting the Marine Corps to delay the requirement, part of the process of equalizing physical standards to integrate women into combat jobs.

The delay rekindled sharp debate in the military on the question of whether women have the physical strength for some military jobs, as service branches move toward opening thousands of combat roles to them in 2016.

Although no new timetable has been set on the delayed physical requirement, Marine Corps Commandant Gen. James Amos wants training officials to “continue to gather data and ensure that female Marines are provided with the best opportunity to succeed,” Capt. Maureen Krebs, a Marine spokeswoman, said Thursday.

Starting with the new year, all female Marines were supposed to be able to do at least three pullups on their annual physical fitness test and eight for a perfect score. The requirement was tested in 2013 on female recruits at Marine Corps Recruit Depot, Parris Island, S.C., but only 45 percent of women met the minimum, Krebs said.

The Marines had hoped to institute the pullups on the belief that pullups require the muscular strength necessary to perform common military tasks such as scaling a wall, climbing up a rope or lifting and carrying heavy munitions.

Officials felt there wasn’t a medical risk to putting the new standard into effect as planned across the service, but that the risk of losing recruits and hurting retention of women already in the service was unacceptably high, she said.

Because the change is being put off, women will be able to choose which test of upper-body strength they will be graded on in their annual physical fitness test. Their choices:

-Pullups, with three the minimum. Three is also the minimum for male Marines, but they need 20 for a perfect rating.

-A flexed-arm hang. The minimum is for 15 seconds; women get a perfect score if they last for 70 seconds. Men don’t do the hang in their test.

Officials said training for pullups can change a person’s strength, while training for the flex-arm hang does little to adapt muscular strength needed for military tasks.

The delay on the standard could be another wrinkle in the plan to begin allowing women to serve in jobs previously closed to them such as infantry, armor and artillery units.

The decision to suspend the scheduled pull-up requirement “is a clear indication” that plans to move women into direct ground combat fighting teams will not work, said Elaine Donnelly, president of the conservative Center for Military Readiness and a critic of allowing women into infantry jobs.

“When officials claim that men and women are being trained the same, they are referring to bare minimums, not maximum qualifications that most men can meet but women cannot,” Donnelly wrote in an email to The Associated Press. “Awarding gender-normed scores so that women can succeed lowers standards for all. Women will suffer more injuries and resentment they do not deserve, and men will be less prepared for the demands of direct ground combat.”

While, as human beings, men and women share biological similarities, the two sexes are most decidedly different…especially in the bodily strength department. That’s not just this Southern Gentleman’s opinion, it is a scientific fact.

Liberals, in their zeal to turn America’s Armed Forces into a Social Engineering Laboratory, have done both our nation and the American Women, who wish to serve in our military, a grave disservice.

While American Women are most certainly bright, intelligent, and capable, they clearly do not possess the upper body strength to pass the same physical standards required for combat duty, that their male counterparts must pass.

To lower the Physical Standards for the Marines,or any other branch of our Armed Forces, will cost lives.

No political point is worth that.