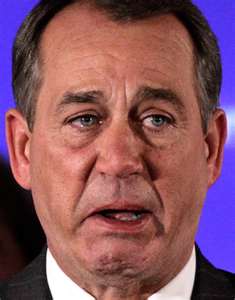 Do you realize that since 1988, a Republican Party Presidential Candidate has won the Popular Vote only once? And, that was George W. Bush in 2004.

There is a reason for that, and it is not what the Liberals, of both political parties would have you think.

Like Reagan before him, Dubya exuded a “Optimistic Conservatism”, which appealed not only to The Republican Party Conservative Base, but to Conservative Democrats, as well.

After losing twice in the Presidential Election to a Far Left Ideologue in the person of Barack Hussein Obama, by now, you would think that the Republican Party would return to the “Optimistic Conservatism” which actually has won both Congressional and Presidential Elections for them in the past, but no….

RSC Chairman Steve Scalise dismissed Teller later in the day over accusations that Teller was leaking intel to the groups.

“We are saddened and outraged that an organization that purports to represent conservatives in Congress would dismiss a staff member for advancing conservatism and working with conservatives outside of Congress,” the leaders’ statement reads. “Paul Teller is one of the true heroes of the conservative movement. For over a decade, he has been the guiding light of conservatism on Capitol Hill. No one has done more to advance conservative principles and block the liberal agenda than Paul Teller. In the tradition of President Reagan, he is a true happy warrior who is both forceful and courageous.”

Conservatives have a right to be upset, as reported on cnbc.com,

House Republicans “capitulated” in agreeing to the two-year budget deal reached last night and left the country to deal with an unsustainable fiscal situation until the peak of the presidential primaries in 2015, when nothing will get done, former federal budget director David Stockman told CNBC on Wednesday.

“First, let’s be clear—it’s a joke and betrayal,” Stockman, who served under President Ronald Reagan, said on “Squawk on the Street.” “It’s the final surrender of the House Republican leadership to Beltway politics and kicking the can and ignoring the budget monster that’s hurtling down the road.”

Stockman added that the budget deal means lawmakers would take a “two-year vacation” from dealing with the country’s fiscal situation and revisit it in 2015 at around the same time as the Iowa straw polls. Without an incumbent in the presidential race, both political parties will be too busy to touch the budget, he said.

While some hailed the budget deal as a breakthrough in Washington’s political gridlock, Stockman compared the accord to “kicking the can” into “low Earth orbit.”

“There’s plenty of room, but they’re unwilling to make the tough choices,” he said. “Now, I understand Democrats doing that. The only hope of getting our fiscal situation under control is if the House Republicans stand up. And they’ve totally capitulated.”

The two-year deal averts deeper cuts to military spending, but Stockman said that’s where lawmakers should have looked for savings. The U.S. no longer faces threats from developed countries and has been “fired as the world’s policemen,” he said.

Any meaningful changes to the budget wouldn’t happen until nearly 2020 if lawmakers don’t address them now, he said. Washington still has a chance to duel over the debt ceiling this February, however, and over unemployment benefits in the shorter term.

They are not moved at all by Obama’s plummeting poll numbers. They are not moved at all by the problems people are having with Obamacare. They are in shell shock. I’ve described it as posttraumatic stress disorder. Whatever, they are literally afraid of one thing, and that is being blamed again for the government shutdown. That was the objective, to make sure there wasn’t a government shutdown, and it didn’t matter what was required.

They believe that Obama is still universally loved and adored and that there is nothing they can do to overcome that.

They think that anything that goes against Obama’s way is going to result in them being blamed, and it’s an election year next year, and they don’t want to get anywhere near another government shutdown. No matter the principle involved. No matter the issues involved. They just weren’t gonna go there. I’ve never seen anything like this. I have never seen this degree of shell shock or whatever else you want to call it.

…Preventing another shutdown is all that mattered. They really, to this minute, believe that they may have been irreparably harmed by being blamed for the shutdown a couple of months ago. They are paralyzed. The fear of what the media will say and do and report has them paralyzed. I think, in large part, that’s also why so many of them are talking about moving ahead with amnesty and so forth.

…they hate the idea of another partial government shutdown. They just do. It isn’t gonna happen no matter what, because they still haven’t gotten over what they think is being blamed for it. Most people don’t even remember. This is the thing. The disconnect with their own voters and base, I have never seen anything like it. They are so frightened of being blamed for another shutdown that they gave up parts of the sequester, which had been a hard line on spending.

I have some news from the Heartland for the Vichy Republicans who have politically barricaded themselves from the American citizens they are supposed to be serving:

They have good reason to be afraid. 2014 is close than they think. and given the way they are treating American Conservatives, 2014 is going to make the Political Massacre of 2010 seem like a co–ed pillow fight.

The Mid-Term Elections of 2014 are on their way to looking like the opening Battle Scenes in the movie “Gladiator” with Russell Crowe.

And guess what, Speaker Boehner? You ain’t Maximus and your fellow Vichy Republicans aren’t the victorious Roman Legionnaires.

I hope you guys have a trade to fall back on.

9 thoughts on “The House Budget Proposal: Vichy Republicans Capitulate. Sell Out Conservative Base.”