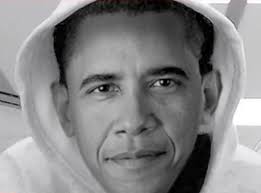 Past Presidents of the United States have all had a famous quotation that survived their time in office. For instance, Teddy Roosevelt said,

And, the greatest president of my lifetime, Ronald Wilson Reagan, who gave us a bunch of great quotations, once quipped,

There are no constraints on the human mind, no walls around the human spirit, no barriers to our progress except those we ourselves erect.

Our current president, Barack Hussein Obama (mm mmm mmmm) gave a quote, during an unexpected appearance at the Daily White House Press Briefing yesterday, that will live on beyond his time in office, too.

Trayvon Martin could have been me 35 years ago.

Is the president saying that he was a 17 year old thug, who was suspended multiple times from high school for suspected burglary, carrying a burglary tool around in his backpack, and chooming?

Well, one out of three, anyway…

However, considering he was raised in Hawaii, by his rich white grandparents, and attended a very prestigious private school, I do believe that he is prevaricating…again.

But, wait, boys and girls, there’s more. As they say in Redneck Fairy tales, instead of “Once Upon a Time”,…Y’all Ain’t gonna believe this sh…err…ummm…Mess. (Caught myself.)

And I don’t want to exaggerate this, but those sets of experiences inform how the African American community interprets what happened one night in Florida. And it’s inescapable for people to bring those experiences to bear. The African American community is also knowledgeable that there is a history of racial disparities in the application of our criminal laws — everything from the death penalty to enforcement of our drug laws. And that ends up having an impact in terms of how people interpret the case.

Now, this isn’t to say that the African American community is naïve about the fact that African American young men are disproportionately involved in the criminal justice system; that they’re disproportionately both victims and perpetrators of violence.  It’s not to make excuses for that fact — although black folks do interpret the reasons for that in a historical context. They understand that some of the violence that takes place in poor black neighborhoods around the country is born out of a very violent past in this country, and that the poverty and dysfunction that we see in those communities can be traced to a very difficult history.

And so the fact that sometimes that’s unacknowledged adds to the frustration. And the fact that a lot of African American boys are painted with a broad brush and the excuse is given, well, there are these statistics out there that show that African American boys are more violent — using that as an excuse to then see sons treated differently causes pain.

I think the African American community is also not naïve in understanding that, statistically, somebody like Trayvon Martin was statistically more likely to be shot by a peer than he was by somebody else. So folks understand the challenges that exist for African American boys. But they get frustrated, I think, if they feel that there’s no context for it and that context is being denied. And that all contributes I think to a sense that if a white male teen was involved in the same kind of scenario, that, from top to bottom, both the outcome and the aftermath might have been different.

Once again, Obama made it all about himself. (As long as he has himself, he’ll never be alone.) However, he went even further than that.

Just in time for his fellow traveler Reverend Al Sharpton’s planned “Demonstrations for Trayvon” in one hundred American cities today. Obama basically gave implied consent for the continued racial strife being stirred up by the Professional Race Baiters.

As I’ve mentioned before, I live right outside of Memphis, TN, in NW Mississippi. I have seen racial strife. In fact, as I recently wrote, I was 9 years old when Dr. King was killed. Additionally, I was in ninth grade when forced busing started. A lot of my friends left our middle class public school for the private schools, which quickly sprang up.

Memphis, while it is valiantly hanging on, has areas within it, that resemble the bankrupt city of Detroit. The same thing happened to my hometown as happened up there: all the taxpayers left town.

There are no constraints on the human mind, no walls around the human spirit, no barriers to our progress except those we ourselves erect.

Compare it to these words:

It’s not to make excuses for that fact — although black folks do interpret the reasons for that in a historical context. They understand that some of the violence that takes place in poor black neighborhoods around the country is born out of a very violent past in this country, and that the poverty and dysfunction that we see in those communities can be traced to a very difficult history.

Evidently, President Obama believes that the Black Community is still shackled and limited in their freedom.

Which is an ironic statement, considering, as a Black man, that he hold the position of president of the most powerful country on the face of the Earth.

Back in High School, I was a Sophomore Commissioner on the Student Council with a fellow named James. James was one of those students who were bused to our school. He went on to play football and run track. More importantly, James went on to have a 4.0 GPA,  make a 32 on his ACT, and receive a full scholarship from Harvard, and later, Johns Hopkins Medical School. James worked hard and he achieved.

Millions of other Black Americans have, as well.

Yesterday’s speech by the president dishonored those who have achieved and constrained those who might achieve.