Sitting at my command console yesterday, (actually, my office desk) I felt a disturbance in the force, as if thousands of Paulians screamed in unison for just one brief moment, and then, there was silence…stunned silence.

Young Skywalker (Senator Rand Paul) stated that these were the Drones he had been looking for:

I’ve never argued against any technology being used when you have an imminent threat, an active crime going on. If someone comes out of a liquor store with a weapon and fifty dollars in cash. I don’t care if a drone kills him or a policeman kills him.

A long, long time ago, in a galaxy far, far away (actually it was right here in America, but I’ve always wanted to write that)…

Young Skywalker stood on the Senate Floor and said,

I will speak as long as it takes, until the alarm is sounded from coast to coast that our Constitution is important, that your rights to trial by jury are precious, that no American should be killed by a drone on American soil without first being charged with a crime, without first being found to be guilty by a court.

His fellow citizens of the Republic (including me) cheered his courage in taking such a heroic stand.

But, now…The Empire (of Paulians) Strikes Back!

I am stunned by Rand’s statement,” reads a blog post on the Daily Paul, one of the largest Ron Paul fan sites. “Unmanned killers in our skys O.K.??? Really? Get away from the Neocons and war mongers Rand, their arrogant and self-righteous air is rotting your brain.”

“How cute. The Politician emerges,” wrote Paladin69, a user on RonPaulForums.com.

“The hell with arresting him I guess,” wrote user The Gold Standard sarcastically. “Just fire a missile at him and move on to the next mundane.”

Reddit’s brand of libertarian politics also repelled Paul’s hypothetical. “A missile into the storefront seems like dramatically excessive force,” wrote Reddit user Ohyeahthatsright. “Rand then seems to be supporting the militarization of police in their use of ‘tools’. I thought he was against the ‘police state.'”

Other libertarian-leaning commentators, such as the American Conservative’s Jordan Bloom, gave Paul more credit. “Paul wasn’t as clear as he should have been,” he writes. “It seems like he’s trying to describe a firefight-type situation in which the cops are forced to neutralize a thief robbing a liquor store, but the way he actually describes it sounds far more innocuous.”

Today’s flap is not the first he’s had with his father’s powerful online fan base, and it surely won’t be the last. But by all accounts, his principled filibuster greatly rejuvenated his credibility with libertarians following his heretical endorsement of Mitt Romney during the presidential election. With today’s remarks, he appears to have chipped away at that newly gained goodwill.

This is not the first time Young Skywalker has irritated the Paulians, who so faithfully followed his father, Paulian Skywalker, even after he morphed into Darth Paulnut, after serving several terms in that wretched hive of villainy  known as Washington, DC.

On the historic stardate of 6/7/2012, young Rand Skywalker threw his support behind Obi Wan MittRomney, in his quest to be the leader of the Republic, becoming a traitor in the eyes of Darth Paulnut’s loyal phalanx of followers. They spoke out in protest to the leader of the Paulian Empire:

“Rand is dead to me,” wrote, Ruffusthedog at the Daily Paul, a heavily-visited pro-Paul website. “He should have never done this.” “Rand Paul is a sell out,” user Alxnz exclaimed. “He just lost my vote in 2016.” “All he had to do was not open his mouth,” wrote user Conalmc. Others even took their anger out on Ron Paul himself. “What will it be Old Man Ron? Will you be forever remembered as the leader in the greatest liberty movement since 1776, or will you go down as Benedict Arnold incarnate,” threatened lionsuar7788. “We will never vote for Romney or your flimsy son.

“”What the heck! If Ron Paul supports/endorses Romney next I will forever lose faith in change and the belief that there are still individuals out there that think for themselves and want to strive for true Liberty,” wrote Ran at RonPaul.com.

It is widely acknowledged that young Skywalker is souping up his Millenium Falcon, in preparation for a lengthy trip to the outer most reaches of the American Galaxy, in an epic quest to become the leader of the Republic.

Perhaps the young Jedi believes that by showing the conviction to stand up to evil, in both that most wretched hive of villainy, Washington, DC, and throughout the American Galaxy, as well, then the good citizens of the Republic, will view him as a promising leader.

However, if the young Jedi wishes to be the leader of Republic, he must, at all times, remember the element that powers the Force of the Republic: Freedom.

For, without Freedom, our Republic would be just another Evil Empire.

And, as Benjamin Franklin wrote,

Those who would give up essential liberty to purchase a little temporary safety deserve neither liberty nor safety.

May The Force, that is the love and protection of Jesus Christ, be with you. 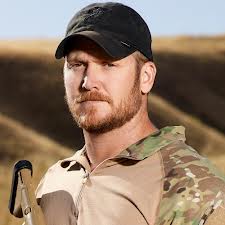 One of our Brightest and Best has tragically fallen. And, a retired United States Representative said that he had it coming.

For those of you who have been living under a rock, here is a summary from apnews.mynews.com:

A 25-year-old Iraq war veteran charged with murdering former Navy SEAL and “American Sniper” author Chris Kyle and his friend turned a gun onto the pair while they were at a Texas shooting range, authorities said Sunday.

Eddie Ray Routh of Lancaster was arraigned early Sunday in the deaths of Kyle, 38, and Chad Littlefield, 35, at a shooting range at Rough Creek Lodge, about 50 miles southwest of Fort Worth. He was being held on one charge of capital murder and two charges of murder.

Capt. Jason Upshaw with the Erath County Sheriff’s Office said Routh used a semi-automatic handgun, which authorities later found at his home. Upshaw said ballistics tests weren’t complete Sunday, but authorities believe it was the gun used in the shootings. Upshaw declined to give any more details about the gun.

Routh has not made any comments indicating what his motive may have been, Upshaw said. Sheriff Tommy Bryant said Routh was unemployed and “may have been suffering from some type of mental illness from being in the military himself.”

“I don’t know that we’ll ever know. He’s the only one that knows that,” Upshaw said.

Bryant didn’t know if Routh was on any medication or whether he had been diagnosed with post-traumatic stress disorder.

The U.S. military confirmed Sunday that Routh was a corporal in the Marines, serving in active duty from 2006 to 2010. He was deployed to Iraq in 2007 and Haiti in 2010. His current duty status is listed as reserve.

Routh is being held on $3 million bond. Authorities did not know whether Routh had a lawyer yet.

Kyle, a decorated veteran, wrote the best-selling book “American Sniper: The Autobiography of the Most Lethal Sniper in U.S. Military History,” detailing his 150-plus kills of insurgents from 1999 to 2009. Kyle said in his book that Iraqi insurgents had put a bounty on his head. According to promotional information from book publisher William Morrow, Kyle deployed to Iraq four times.

Bryant said Kyle, Littlefield and Routh went to the shooting range around 3:15 p.m. Saturday. A hunting guide at Rough Creek Lodge came across the bodies of Kyle and Littlefield around 5 p.m. and called 911.

Upshaw said autopsies were still pending and he could not say how many times the men were shot or where on their bodies they were hit.

Chris Kyle’s death seems to confirm that “he who lives by the sword dies by the sword.” Treating PTSD at a firing range doesn’t make sense

Back on December 27, 2011, thehill.com reported on an article written by a Former Aide to Dr. Paul, Eric Dondero, that was making the round of Conservative Blogs. Here is an excerpt:

Ron Paul was opposed to the War in Afghanistan, and to any military reaction to the attacks of 9/11. He did not want to vote for the resolution. He immediately stated to us staffers, me in particular, that Bush/Cheney were going to use the attacks as a precursor for ‘invading’ Iraq. He engaged in conspiracy theories including perhaps the attacks were coordinated with the CIA, and that the Bush administration might have known about the attacks ahead of time. He expressed no sympathies whatsoever for those who died on 9/11, and pretty much forbade us staffers from engaging in any sort of memorial expressions, or openly asserting pro-military statements in support of the Bush administration.

Think of what happened after 9/11, the minute before there was any assessment, there was glee in the administration because now we can invade Iraq, and so the war drums beat.

So, how does his son, “the rising star” among Conservatives, Rand Paul, feel about what dear ol’ Dad said?

In the aftermath of Ron Paul’s despicable tweet today slamming US Navy SEAL sniper Chris Kyle, murdered on Saturday while helping a fellow soldier learn to cope with post traumatic stress syndrome, Paul’s son, Senator Rand Paul (R-KY) has told Breitbart News exclusively, “Chris Kyle was a hero like all Americans who don the uniform to defend our country. Our prayers are with his family during this tragic time.”

Dr. Paul, after a thunderous backlash, tried to walk his Twitter comments back late yesterday on his Facebook Page,

As a veteran, I certainly recognize that this weekend’s violence and killing of Chris Kyle were a tragic and sad event. My condolences and prayers go out to Mr. Kyle’s family. Unconstitutional and unnecessary wars have endless unintended consequences. A policy of non-violence, as Christ preached, would have prevented this and similar tragedies. -REP

Everyone has heard of a backhanded compliment, but backhanded sympathy?

Concerning our Brightest and Best, Dr. Paul once asserted,

I have never met anyone who did not support our troops. Sometimes, however, we hear accusations that someone or some group does not support the men and women serving in our Armed Forces. But this is pure demagoguery, and it is intellectually dishonest.

Dr. Paul, we were all born on a day ending in “y”…but it certainly was not yesterday.

Tell it to the Army, because the Navy ain’t buyin’ it. Oh, wait…the Army won’t either.