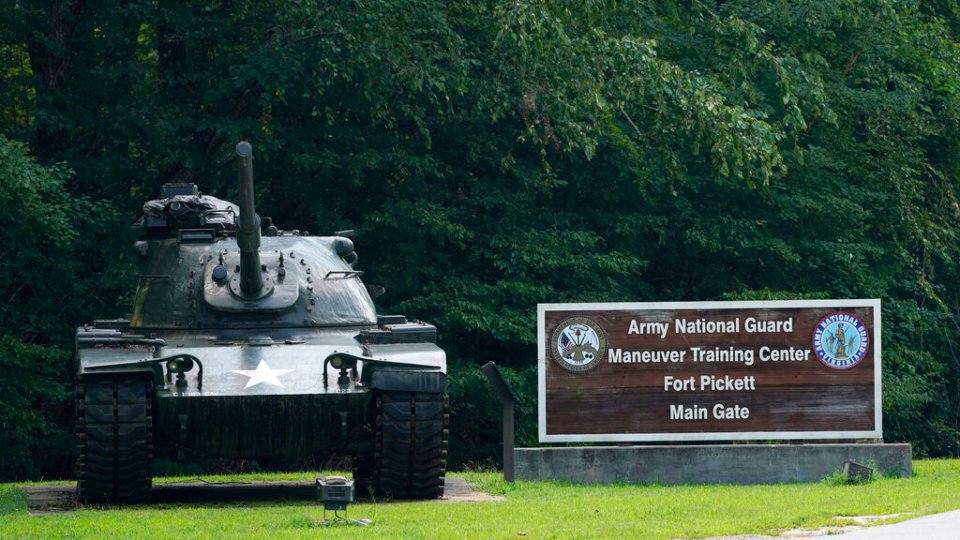 The American people deserve answers from the Biden administration over their failed planning in Afghanistan.

That is not all they have to answer for.

A Tennessee congressman who is also an Iraq & Afghanistan war veteran sent a letter to the State Department demanding answers after a source informed his office evacuees being held at a Southside Virginia military base have had “free reign” of the campus and have allegedly been leaving the base using rideshare apps without restraint from officials, Fox News has learned.

Rep. Mark Green, who represents part of Middle Tennessee wrote to Secretary of State Antony Blinken Wednesday after a source with knowledge of the situation made the allegations to his office.

Green wrote Blinken asking for information regarding allegations not-fully-vetted Afghan evacuees being held at Fort Pickett have “basically have free reign of the complex and have even been allowed to leave despite not having completed the vetting process.”

He claimed soldiers at Fort Pickett, located between Petersburg and South Boston, have no authority to “arrest or stop” any of the evacuees from leaving the base on their own free will, regardless of vetting status.

“My source has made shocking allegations,” Green wrote. Among the allegations mentioned, Green wrote “several evacuees have been picked up by Uber drivers without any permission from authorities, or being cleared to leave.”

Green called upon his combat service in Afghanistan to request confirmation or denial of the allegations made by the source, telling Blinken they pose an obvious national security risk.

The State Department has not been able to provide a breakdown of evacuees, pertaining to how many are interpreters who aided the U.S. military, how many are other SIV holders, and how many are simply Afghan citizens seeking to escape the ruthless Taliban rule.

When contacted by Fox News, the State Department said as a general matter it does not comment on communications with Congress.

Well, after all, what can a few possible members of the Taliban accomplish?

Here is what happened the last time unvetted Islamists were allowed to roam freely in America.

15 of the 19 Muslim Terrorists who carried out the attack on September 11, 2001 were Saudi Arabian citizens — and the mastermind Osama bin Laden was the son of a wealthy Saudi Arabian contractor with close ties to the Saudi Royal Family.

Court documents in the case of Zacarias Moussaoui, the 20th hijacker from 9/11/2001, outline how the three main leaders in Florida — Mohamed Atta, Marwan al-Shehhi and Ziad Jarrah — arrived in Florida in the summer of 2000. Interviews and media accounts fill many of the gaps left by the FBI.

Atta, al-Shehhi and Jarrah had attended Technical University in Hamburg, Germany, in the late 1990s. They had been roommates there, part of an Islamic student group that hated Western ways.  Atta signed a “will” in 1996, pledging to die in a “holy war” against the infidels.

The federal indictment against Moussaoui told how more than $114,000 from the United Arab Emirates was distributed that summer to Atta and al-Shehhi through SunTrust bank accounts in Florida. Much more would come later from the al-Qaida terrorist network.  The cost of the operation was nearly $500,000.

The indictment said Atta and al-Shehhi took flying lessons from July to December at Huffman Aviation, a flight school in Venice.

Jarrah showed up that summer in Venice also, taking piloting classes at a neighboring flight school.

When Atta and al-Shehhi got their commercial pilots licenses in December 2000, Florida was still pre-occupied with the close election that put George W. Bush in the White House.

A few days later, Atta and al-Shehhi moved over to Florida’s east coast, in Opa-Locka, where each paid $1,500 cash for three hours in a Boeing 727 simulator.

During the spring and summer of 2001, eight additional hijackers came to the United States and settled in Florida. Nine opened SunTrust bank accounts.  Three others arrived in San Diego, completing the five-man team based in California.

That spring and summer, the Florida terrorist group made itself at home in South Florida, renting apartments and condos, attending gyms, and going to restaurants.  They were seen a lot, hanging around Hollywood and Delray Beach.

These terrorists assimilated into American Society, excuse the expression, flying under the radar, only to strike on September 11th, 2001, killing 2,819 in the word Terrorist attack ever on American soil.

Where the funding for these Saudi Terrorists actually came from, remains a mystery,

I think that the procedures being used to bring in poorly-vetted Afghanis directly from a country which was just taken over the the murderous Radical Islamists known as the Taliban was a very stupid and dangerous move by an incompetent Administration.

#BidenDisaster is now doing great damage to America all over the world.

The cover-up is no longer fooling anyone.

As the U.S. military and State Department rush to evacuate American citizens and Afghan allies from Kabul’s airport, Taliban checkpoints are cutting off many from freedom and safety – and reports on the ground indicate the militants are summarily executing people who helped U.S. forces over the years.

Ryan Rogers, a retired Marine sergeant, told Fox News Thursday that the interpreter he worked with during the bloody 2010 battle of Marjah in Helmand province is currently trapped in Kabul, prevented from reaching the airport as Taliban fighters seek out and murder former Afghan commandoes and interpreters.

“He told me yesterday they hung three [Afghan National Army] commanders that they had found,” he said. “And that close to the place that he’s hiding, they’re going house-to-house and that they sent a transmission out saying they had plans for the people that operated with America.”

“I said, hey, did you see any of this stuff with your eyes? He said yes,” Rogers said. “They’re not showing this stuff because the people are cheering, but they’re scared to death, and they’re hanging these people. And he said they’re going house to house and their priorities are Afghan National Army Special Forces, the police special forces and the interpreters.”

The Biden administration on Thursday finally acknowledged reports that evacuees were having trouble reaching the international airport and Kabul, which is surrounded by Taliban checkpoints.

State Department spokesman Ned Price said during a Thursday news briefing that the government had received a “small handful of reports” of American citizens who were unable to reach the airport. But he also said that though U.S. officials were aware of reports that interpreters and former Afghan military officers were being hunted and killed by the Taliban forces, he could not confirm their veracity.

“I’m just not in a position to confirm those details,” he said. “Every time we see a detail like this, we take it extraordinarily seriously, and we do what we can.”

Over the past two weeks, as Taliban forces swept across the country, there were reports of the militants executing surrendering Afghan soldiers. And Fox News has received video showing gunmen in pickup trucks, firing bullets in the streets of Kabul.

“In a bipartisan fashion, there’s extreme disappointment, especially by those that have served,” Rep. Brad Wenstrup, an Ohio Republican and Army Reserve officer, told Fox News. “And we have lost on this our moral standing in the world, and it’s a sign of weakness rather than strength.”

Wenstrup pointed to bipartisan legislation passed months ago designed to lessen the red tape U.S. allies would need to get through to safely leave the country as the American military withdrew. But the rushed withdrawal left thousands of people stranded anyway.

“I find it hard to believe that our military and intelligence community would have recommended it this way,” he said, faulting the Biden administration’s leadership. “But those are some of the questions that we need to have answered.”

Wenstrup, who served in the Army in Iraq, said he helped more than one interpreter relocate from there. One of them, now an American citizen and physician at Ohio State, called the Afghanistan situation “disheartening,” the congressman said.

But despite the chaotic U.S. withdrawal, Wenstrup had a message for veterans of the War on Terror.

“We have not had another attack in 20 years,” he said. “We must praise all those that have sacrificed so much in the last 20 years because they did keep us safe, and they should be applauded for that.”

And so did their coalition partners.

Tens of thousands of American Citizens and Afghani Allies are trapped in what is noW a Radical Islamic Terrorist Nation.

They are desperately waiting on help from the United States Government.

Meanwhile, where is the President of the United States of America?

He has gone into hiding in Delaware, at Camp David, or in the Basement of the White House, being fed soup as our fellow Americans and the Afghanis who stood with them against Radical Islamic Barbarians are feeling abandoned and are in danger of being killed.

Yes, I blame Hoe Biden for this situation.

He is the President. Donald J. Trump is not.

The responsibility for saving the lives of those trapped in Afghanistan lies squarely on the shoulders of a demented old man who wasn’t the sharpest knife in the drawer, even when he was younger.

If any of those trapped are held for ransom or killed, their blood is on Joe Biden’s hands.

And, not just his hands, but those of his “Handlers”, his military leaders, and the pompous idiots of the Democrat Elite, including “Dr, Jill”, who thought that it would be a great idea to run a senile old man for President and then commit massive fraud to get him elected.

Actions (or inactions) have consequences.

The arrogance of the Democrats, compiled with Biden’s lifetime record of Foreign Police mistakes, have created a situation that makes the Iranian Hostage Crisis pale in comparison.

It is quite apparent that Biden and his Military Advisors are nothing but a bunch of pencil-pushing lightweights that do not have a spine or A SET among them.

This crisis in Afghanistan has revealed the true colors of the Democrat Elite to the world.