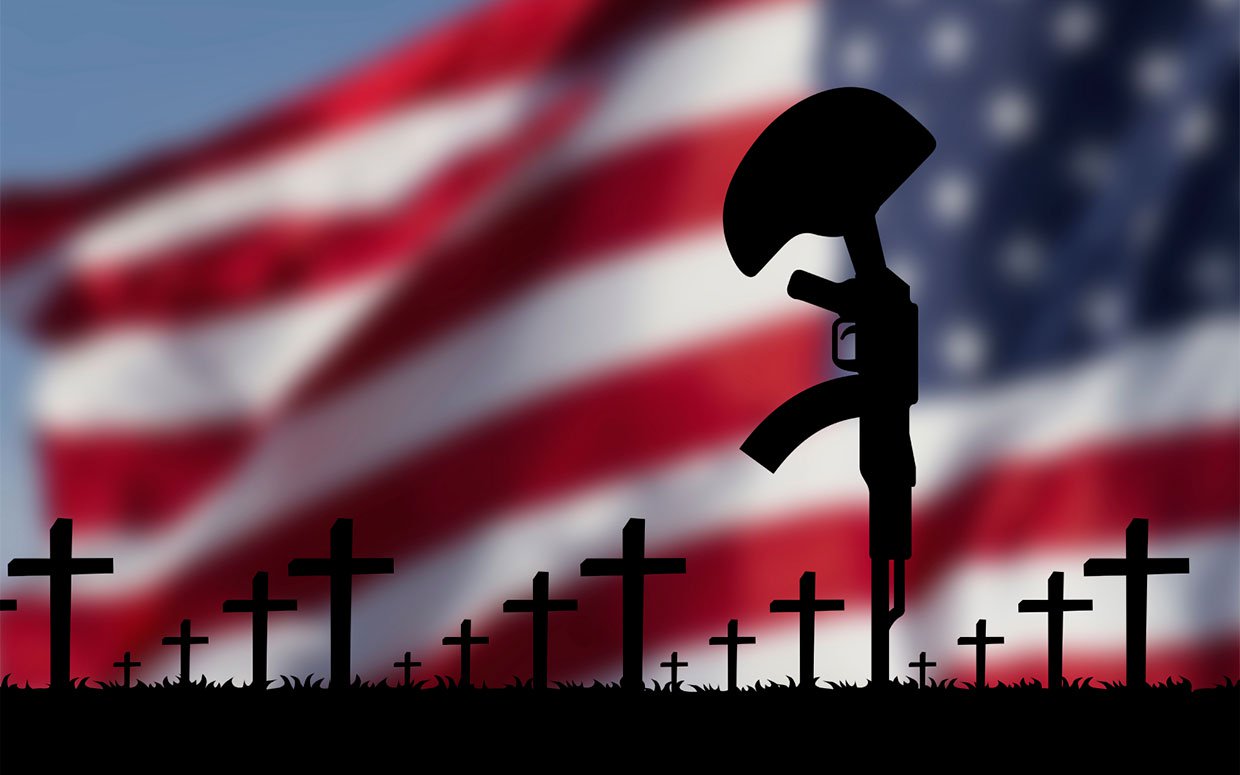 Memorial Day isn’t just about honoring veterans, its honoring those who lost their lives. Veterans had the fortune of coming home. For us, that’s a reminder of when we come home we still have a responsibility to serve. It’s a continuation of service that honors our country and those who fell defending it. – Pete Hegseth

Today is a day of solemn remembrance, during which we honor our fallen heroes.

Memorial Day, originally called Decoration Day, is a day of remembrance for those who have died in our nation’s service. There are many stories as to its actual beginnings, with over two dozen cities and towns laying claim to being the birthplace of Memorial Day. There is also evidence that organized women’s groups in the South were decorating graves before the end of the Civil War: a hymn published in 1867, “Kneel Where Our Loves are Sleeping” by Nella L. Sweet carried the dedication “To The Ladies of the South who are Decorating the Graves of the Confederate Dead” (Source: Duke University’s Historic American Sheet Music, 1850-1920). While Waterloo N.Y. was officially declared the birthplace of Memorial Day by President Lyndon Johnson in May 1966, it’s difficult to prove conclusively the origins of the day. It is more likely that it had many separate beginnings; each of those towns and every planned or spontaneous gathering of people to honor the war dead in the 1860’s tapped into the general human need to honor our dead, each contributed honorably to the growing movement that culminated in Gen Logan giving his official proclamation in 1868. It is not important who was the very first, what is important is that Memorial Day was established. Memorial Day is not about division. It is about reconciliation; it is about coming together to honor those who gave their all.

Memorial Day was officially proclaimed on 5 May 1868 by General John Logan, national commander of the Grand Army of the Republic, in his General Order No. 11, and was first observed on 30 May 1868, when flowers were placed on the graves of Union and Confederate soldiers at Arlington National Cemetery. The first state to officially recognize the holiday was New York in 1873. By 1890 it was recognized by all of the northern states. The South refused to acknowledge the day, honoring their dead on separate days until after World War I (when the holiday changed from honoring just those who died fighting in the Civil War to honoring Americans who died fighting in any war). It is now celebrated in almost every State on the last Monday in May (passed by Congress with the National Holiday Act of 1971 (P.L. 90 – 363) to ensure a three day weekend for Federal holidays), though several southern states have an additional separate day for honoring the Confederate war dead: January 19 in Texas, April 26 in Alabama, Florida, Georgia, and Mississippi; May 10 in South Carolina; and June 3 (Jefferson Davis’ birthday) in Louisiana and Tennessee.

As I sat down to write today’s post, I tried to think about something pithy to write. Then, I realized that today is not a day for witticisms and sarcasm.

I thought about all of the American lives, all of the brave men and women who have sacrificed their lives out of love and devotion for our Sovereign Nation and their fellow Americans, both their comrades and their families back home.

The unselfish devotion shown by these brave Americans is made fun of and remains the source of derision by many devotees of the anti-American political philosophy who consider themselves to be the “smartest people in the room”.

These same “enlightened” individuals consider “patriotism” to be a bad word.

They have replaced it words like “nationalism” and “jingoism”.

The devotees of this political philosophy do not believe in American Exceptionalism.

They believe that America is “just another country”, certainly not worthy of sacrificing their lives for.

These people just don’t get it.

Freedom is not free.

That is why brave men and women of the past and the present age have fought and died while wearing the uniforms of our Armed Forces.

When they went into battle, they did not just represent their hometowns…they represented all of us.

From the germ of an idea to the greatest country on the face of God’s green Earth, this country has stood strong because of resolute men and women who were willing to “pledge their lives, their fortunes, and their sacred honor” to protect “The Shining City Upon a Hill”.

Today, standing up and being vocal in our opposition to those who would “radically change” EVERYTHING that thesr American Heroes and Heroines fought and died for is our “charge to keep”.

May God bless and comfort the families of our Fallen Heroes and may their memories and our American Freedom endure.