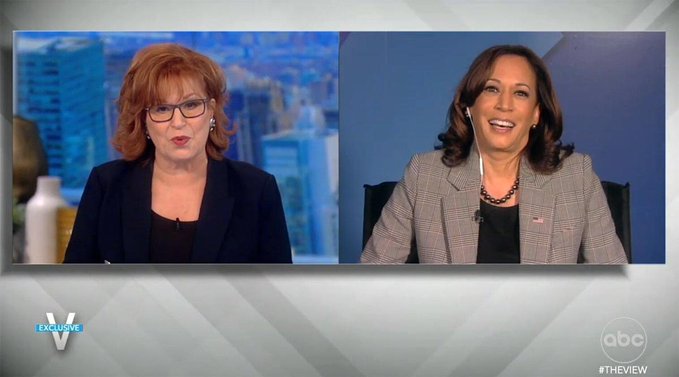 So weve recently learned that the two The View hosts that "tested positive" for covid right before the Kamala interview, the same two most likely to grill Kamala about human rights violations, subsequently tested negative not one, not two, but THREE times after the initial test🤣

Ana Navarro, one of two co-hosts who were pulled from ABC’s “The View” live on air Friday due to positive COVID-19 tests, has since revealed the results that caused the chaos were false positives.

Producers informed Navarro and Sunny Hostin in their earpieces halfway through Friday’s broadcast that they would have to leave the Hot Topics table, leaving Joy Behar and Sara Haines to conduct the rest of the show on their own. The remaining hosts often struggled to kill time, at one point taking questions from the audience, but often not being able to hear the questions that were muffled by their masks.

Friday’s drama was even more pronounced considering Navarro and Hostin were pulled just as Vice President Kamala Harris was on her way to the studio for an in-person interview. Even though Harris made it to the building, producers explained her appearance would end up taking place remotely from a separate room out of precaution.

“We were very excited to have the vice president come on ‘The View.’ And then all of a sudden it turned into an episode of ‘Curb Your Enthusiasm,'” Navarro said of Friday’s drama in an interview with CNN’s Anderson Cooper. “It was just surreal.”

Navarro also revealed what she discovered behind the scenes. While waiting in her dressing room after being ushered out of the studio, Navarro said both the PCR and antigen tests she took came back false positive. She said she couldn’t speak to Hostin’s results out of privacy.

“So we took a rapid antigen test, and we took a PCR, both have come back false positive for me,” Navarro said.

Navarro also told Cooper that as a guest co-host for the talk show she gets tested weekly.

“Feeling good and hoping it was just an inopportune, very public false positive,” Navarro tweeted as an update on Saturday. “Please get vaccinated and stay safe folks, so we can beat this damn thing, once and for all.”

She has since posted on social media that a third COVID test came back negative.

“Obviously what happened yesterday was a false positive, a very public, a very inopportune, a very melodramatic false positive. But fortunately we now tested three times. All three have been negative,” she added on Instagram.

Fox News contributor Joe Concha was among the critics who blasted “The View” for the awkward episode. He argued that not only was the manner in which the initial positive COVID results was handled a “train wreck,” but so too was the interview with Harris that followed. Behar and Haines, he noted, chose not to ask the vice president about the failed drone strike in Kabul, the confusion over booster shots, or France’s frustration with the U.S. over a lost submarine deal.

Concha said it was all designed to give the vice president “confidence” at a time when her approval ratings were slipping.

In a video of Fox News’ “Outnumbered” which accompanied the above article, Harris Faulkner asked why the COVID-19 Tests were taken shortly before Kamala got there. She explained that the protocol at Fox News called for those tests to be taken way in advance of an in-person interview.

Add that and the fact that they supposedly came back as “false positives” starts my Reporter’s nose for news itching.

Here’s a thought for you::

Suppose you have an interview with a Vice-President who could not even get 1% of votes during the Democratic Party Primaries scheduled for a live interview and her poll numbers, along with her boss’, a demented doddering old fool installed as President, have been falling like a couple of rocks from the top of Pike’s Peak.

What do you do in order to limit her exposure to a nationwide audiences who may not already know that she is nothing but a clueless lightweight who slept her way into politics and is way out of her league even attempting to do her job as Vice-President?

You come up with a “spontaneous” distraction resembling what we used to call a “Chinese Fire Drill” which would give you an excuse to do a remote interview and lob softball questions at Kamala in order to protect her from her own incompetence.

The woman is unethical, immoral, and clueless.

Perhaps that is why the Democrat Elite chose her to be Joe’s running mate.

They believed that they would be “two peas in a pod”.

The problem with Kamala, as they have found out, her arrogance not only exceeds her stupidity, it makes it unbearable and forces it right out in the open.

So, ABC attempted to camouflage her short comings.

…Like Biden’s “Handlers” are doing with calling a early “lid” on his appearances every day and flying him away to Delaware every week.

Hence, the chants against Joe Biden by the crowd at College Football Games every Saturday.