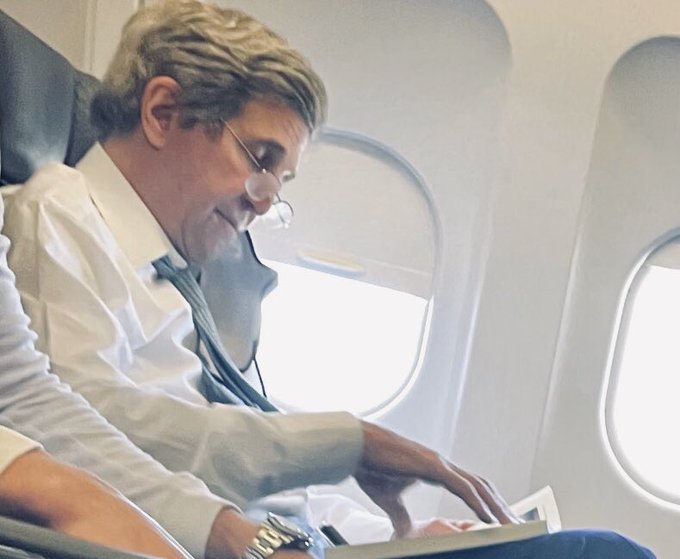 Climate czar John Kerry was caught not wearing his mask while reading a book on an American Airlines flight in spite of a Centers for Disease Control and Prevention (CDC) mandate requiring masks on flights.

The photo, which was first posted by conservative outlet the Tennessee Star, shows the former secretary of state wearing his mask hanging off one ear as he reads a book in first class.

Fox News confirmed the photo’s authenticity with the passenger, who wished to remain anonymous. The passenger shared a photo of his boarding pass with Fox News to confirm he was on the flight.

The passenger said they saw the president’s climate envoy wearing his mask while at the boarding gate, but took it off shortly after boarding ahead of other passengers.

“I salute our Very Special Presidential Envoy for Climate for not flying private, but instead flying first class commercial with the rest of us common folk,” said the passenger. “And while he can’t bring himself to follow his own party’s mask restrictions, we should cut him some slack.”

The passenger told Fox News that they did not see any of the flight attendants onboard instructing Kerry to put his mask back on, but noted that Kerry later wore it for most of the flight.

American Airlines said on Twitter and reiterated in a statement to Fox News that the company would be “looking into” the incident and reiterated that “masks are required” on their planes for everyone.

Kerry responded on Twitter saying that the mask slip was “momentary.”

“Feels like there’s some St. Patrick’s day ‘malarkey’ afoot on Twitter,” Kerry wrote. “Let’s be clear: If I dropped my mask to one ear on a flight, it was momentary. I wear my mask because it saves lives and stops the spread. It’s what the science tells us to do.”

The CDC issued a mandate in January that went into effect at the beginning of last month which states that individuals “must wear masks that cover both the mouth and nose” while traveling on public transportation and while at a “transportation hub.”

What John Kerry did and his response to it is simply another example of Liberal Elitism or being a member of the “Political Elite”.

After his gig as Vice-President was over with, “Sleepy Joe” Biden, believe it or not, made a profound statement in an exit interview with the Los Angeles Times.

He said his party failed to connect with working-class, largely white voters, and warned that “a bit of elitism” has “crept in” to party thinking.

He recalled watching a Trump rally in Pennsylvania near where he grew up. “They’re all the people I grew up with,” he said. “They’re their kids. And they’re not racist. They’re not sexist. But we didn’t talk to them.”

There’s a reason for that.

The Far Left Democrats on Capitol Hill have become so eaten up with their own power and egotism that they have built a fence around Capitol Hill and the White House to keep us “Deplorables” or, as they call us now, “insurrectionists” out.

The Democrats live in their own little bubble there in the Beltway, looking down on us peons down here in Flyover Country.

And, as John Kerry showed, rules do not apply to them. Just to us.

This collective mindset, along with their unbridled lust for power is what led them to steal the 2020 Presidential election and install Joe Biden as their puppet.

John Kerry spent the Trump Presidency plotting with and advising the Iranians as to how to “deal” with Trump.

So, to simplify things: He’s gone from peddling treason to dealing in B.S.

After all, he IS one of the “Smartest People in the Room”.

I’ve got to go hurl.