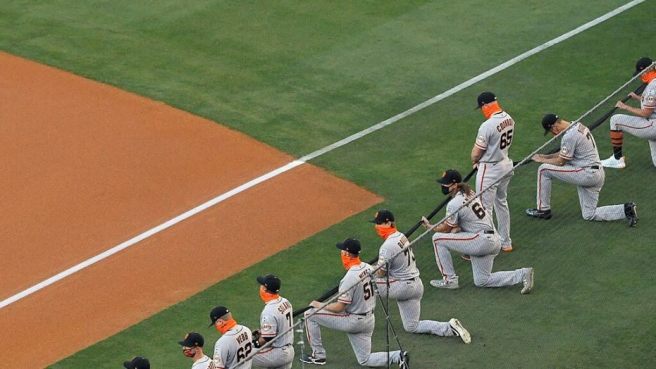 Yesterday, Major League Baseball took a chainsaw to its cornerstones of tradition and patriotism by openly supporting kneeling during the National Anthem by players and/or coaching staff that choose to do so. My experience with the game is admittedly anecdotal, but not exclusive.

San Francisco Giants pitcher Sam Coonrod was the only player to stand during a moment honoring the Black Lives Matter movement ahead of the season opener against the Los Angeles Dodgers, telling reporters after the game that as a Christian he “can’t kneel before anything besides God.”

MLB provided teams with a long black ribbon that players on both sides jointly held as they kneeled in unity.

Every player and coach from the Washington Nationals and New York Yankees took part in the demonstration ahead of their game, but hours later, Coonrod stood alone.

I’m a Christian,” he said, according to TMZ Sports. “So I just believe that I can’t kneel before anything besides God.”

Aside from his religious beliefs, the 27-year-old relief pitcher said there are aspects of the movement that he disagrees with.

Team manager Gabe Kapler, who kneeled during the ribbon ceremony as well as during the national anthem, said he respects Coonrod’s decision to stand.

“The one thing that we said is we were going to let people express themselves,” Kapler said. “We were going to give them the choice on whether they were going to stand, kneel or do something else. That was a personal decision for Sam.”

Dodgers outfielder Mookie Betts, who signed a 12-year, $365 million contract on Wednesday, and some of the Giants kneeled during the national anthem.

Several players during the Nationals-Yankees game wore T-shirts saying Black Lives Matter during batting practice, while the letters “BLM” were stenciled into the back of the mound at the center of the diamond.

Does Major League Baseball know exactly what BLM is and what they are sacrificing their existence as a professional sports league for?

Coonrod hit the nail on the head when he said,

First off, THEY ARE A MARXIST ORGANIZATION.

According to an article on Breitbart.com…

The co-founder of the Black Lives Matter (BLM) movement, Patrisse Cullors, was the protégé of a communist-supporting domestic terrorist for over a decade, spending years training in political organizing and absorbing the radical Marxist-Leninist ideology which shaped her worldview.

Eric Mann, who mentored Cullors for over a decade in community organizing, was a member of radical-left militant groups: Students for a Democratic Society and the Weather Underground, which bombed government buildings and police stations in the 1960s and 1970s.

In a newly resurfaced video from 2015, Black Lives Matter co-founder Patrisse Cullors reveals that she and her fellow BLM founders are “trained Marxists.”

In the video, Cullors is interviewed by Jared Ball of the Real News Network and discusses the direction of the BLM movement.

“The first thing, I think, is that we actually do have an ideological frame. Myself and Alicia in particular are trained organizers,” she said. “We are trained Marxists. We are super-versed on, sort of, ideological theories. And I think that what we really tried to do is build a movement that could be utilized by many, many black folk.”

In previous interviews in 2018, while promoting her then-new book titled, “When They Call You a Terrorist: A Black Lives Matter Memoir,” Cullors describes her introduction to and affinity for Marxist ideology.

In an interview with Democracy Now!, Cullors describes how she became a trained organizer with the Labor/Community Strategy Center, calling it her “first political home” and the center’s director, Eric Mann, her personal mentor.

She told The Politic that it was there that she was trained from her youth and grew as a leader.

The “negative things” which BLM believes in concerning the nuclear family can be found on theirofficial website, BlackLivesMatter.com…

We are guided by the fact that all Black lives matter, regardless of actual or perceived sexual identity, gender identity, gender expression, economic status, ability, disability, religious beliefs or disbeliefs, immigration status, or location.

We make space for transgender brothers and sisters to participate and lead.

We are self-reflexive and do the work required to dismantle cisgender privilege and uplift Black trans folk, especially Black trans women who continue to be disproportionately impacted by trans-antagonistic violence.

We build a space that affirms Black women and is free from sexism, misogyny, and environments in which men are centered.

We practice empathy. We engage comrades with the intent to learn about and connect with their contexts.

We make our spaces family-friendly and enable parents to fully participate with their children. We dismantle the patriarchal practice that requires mothers to work “double shifts” so that they can mother in private even as they participate in public justice work.

We disrupt the Western-prescribed nuclear family structure requirement by supporting each other as extended families and “villages” that collectively care for one another, especially our children, to the degree that mothers, parents, and children are comfortable.

We foster a queer‐affirming network. When we gather, we do so with the intention of freeing ourselves from the tight grip of heteronormative thinking, or rather, the belief that all in the world are heterosexual (unless s/he or they disclose otherwise).

We cultivate an intergenerational and communal network free from ageism. We believe that all people, regardless of age, show up with the capacity to lead and learn.

We embody and practice justice, liberation, and peace in our engagements with one another.

On May 5, 2015, Black Economist and Conservative Pundit, Dr. Thomas Sowell, published the following observation in an op ed about racial division…

You cannot take any people, of any color, and exempt them from the requirements of civilization — including work, behavioral standards, personal responsibility and all the other basic things that the clever intelligentsia disdain — without ruinous consequences to them and to society at large.

Non-judgmental subsidies of counterproductive lifestyles are treating people as if they were livestock, to be fed and tended by others in a welfare state — and yet expecting them to develop as human beings have developed when facing the challenges of life themselves.

One key fact that keeps getting ignored is that the poverty rate among black married couples has been in single digits every year since 1994. Behavior matters and facts matter, more than the prevailing social visions or political empires built on those visions. [Emphasis mine.]

If Major League Baseball, those who are still rioting in our major cities, and all other Modern American Liberals, both black and white, Democrat and Republican, in Municipal, State, and National Leadership Positions, would focus their angst and “concern” on the society-altering, continuing dissolution of the Black Family Unit and work instead toward the restoration of the Black Family Unit, instead of attempting to blame our city’s police officers for the violence in our streets, perhaps the stifling defeatism of the cycle of Generational Poverty and Crime, and the violence it brings, would eventually be a thing of the past, or greatly diminished, anyway.

Then, I wouldn’t be awakened every morning, by the Local News in Memphis, to stories about Black Americans killing each other, or mobs of Black Teenagers beating up innocent people.

And American Families could actually watch an enjoyable Sunday Afternoon of Major League Baseball again without the players’ public displays of homage to a failed political ideology invented by Karl Marx, spoiling it for everybody.

As Christians, we bow before no one but God.

As grateful Americans, we stand proudly for our National Anthem.