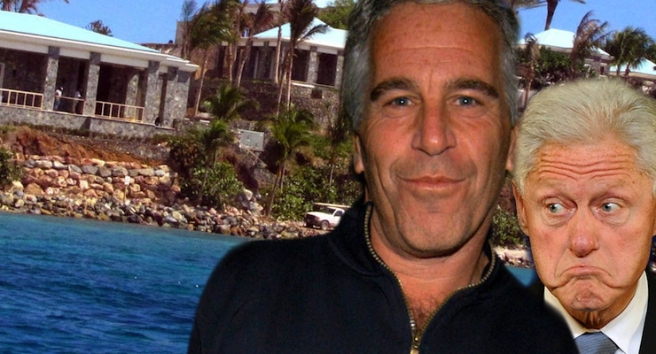 “It depends upon what the meaning of the word ‘is’ is. If ‘is’ means ‘is and never has been’ that’s one thing – if it means ‘there is none’, that was a completely true statement.” – President Bill Clinton, Grand Jury Testimony, August 17, 1998

Bill Clinton “knows nothing” about the “terrible crimes” linked to Jeffrey Epstein, the former president’s spokesman said Monday, in Clinton’s first statement after new sex-trafficking charges were lobbed against the wealthy financier.

An indictment alleging sex trafficking and sex trafficking conspiracy was unsealed Monday morning against Epstein, the wealthy and politically connected financier who pleaded not guilty during his initial appearance in a New York City federal court. Prosecutors alleged that Epstein, the 66-year-old wealthy hedge fund manager arrested on Saturday, preyed on “dozens” of victims as young as 14.

“In 2002 and 2003, President Clinton took a total of four trips on Jeffrey Epstein’s airplane: one to Europe, one to Asia, and two to Africa, which included stops in connection with the work of the Clinton Foundation,” the statement said. “Staff, supporters of the foundation, and his Secret Service detail traveled on every leg of every trip. He had one meeting with Epstein in his Harlem office in 2002, and around the same time made one brief visit to Epstein’s New York apartment with a staff member and his security detail. He’s not spoken to Epstein in well over a decade, and he has never been to Little St. James Island, Epstein’s ranch in New Mexico, or his residence in Florida.”

…Meanwhile, Attorney General Bill Barr said he has recused himself from the matter “because one of the law firms that represented Epstein long ago was a firm I subsequently joined for a period of time.”

On Saturday evening, Christine Pelosi, a Democratic National Committee official and daughter of House Speaker Nancy Pelosi, warned conspicuously that it is “quite likely that some of our faves are implicated” in the “horrific” sex-trafficking case.

“This Epstein case is horrific and the young women deserve justice,” Pelosi tweeted. “It is quite likely that some of our faves are implicated but we must follow the facts and let the chips fall where they may – whether on Republicans or Democrats.”

For his part, Trump previously called attention to Clinton’s dealings with the financier.

“Nice guy — uh, got a lot of problems coming up, in my opinion, with the famous island, with Jeffrey Epstein,” Trump told Fox News’ Sean Hannity in 2015, referring to Clinton’s connections with Epstein. “A lot of problems.”

Meanwhile, Trump biographer Tim O’Brien this weekend reposted an excerpt fom a 2002 profile of Epstein in New York Magazine, in which Trump told a reporter, “I’ve known Jeff for fifteen years. Terrific guy. He’s a lot of fun to be with. It is even said that he likes beautiful women as much as I do, and many of them are on the younger side.”

Trump banned Epstein from his Mar-a-Lago estate “because Epstein sexually assaulted an underage girl at the club,” according to court documents filed by Bradley Edwards, the lawyer who has represented several Epstein accusers. That claim has not been confirmed by Trump or Mar-a-Lago.

Epstein appeared Monday in a hearing that lasted about 30 minutes wearing a blue prison top with a brown T-shirt underneath, in addition to orange slip-on sneakers. Prosecutors said in the 36 hours since Epstein’s arrest, multiple attorneys and several individuals have come forward and said they were victims, none of whom had previously been spoken to.

Epstein allegedly created and maintained a “vast network” and operation from 2002 “up to and including” at least 2005 that enabled him to “sexually exploit and abuse dozens of underage girls” in addition to paying victims to recruit other underage girls.

“This allowed Epstein to create an ever-expanding web of new victims,” U.S. Attorney Geoffrey Berman said at a news conference.

Berman added that nude photographs “of what appeared to be underage girls” were discovered at Epstein’s Manhattan mansion during a search following his arrest Saturday. The hundreds of photos were discovered in a locked safe, according to officials.

Prosecutors also allege Epstein “worked and conspired with others, including employees and associates” who helped facilitate his conduct by contacting victims and scheduling their sexual encounters with the 66-year-old at his mansion in New York City and Palm, Beach, Fla.

At Epstein’s multi-story mansion on the Upper East Side of Manhattan, prosecutors said that victims would be escorted to a room with a massage table where they would perform a massage on him.

“The victims, who were as young as 14 years of age, were told by Epstein or other individuals to partially or fully undress before beginning the ‘massage,'” prosecutors wrote. “During the encounter, Epstein would escalate the nature and scope of physical contact with his victims to include, among other things, sex acts such as groping and direct and indirect contact with the victim’s genitals.”

In Monday’s court appearance, prosecutors said that the massage room in New York was set up exactly as how the alleged victims described it 15 years ago.

Victims would be paid hundreds of dollars in cash by either Epstein or one of his associates or employees, according to prosecutors. The 66-year-old also allegedly “incentivized his victims” to become recruiters by paying the victim-recruiters hundreds of dollars for each girl brought to him.

“In so doing, Epstein maintained a steady supply of new victims to exploit,” federal prosecutors said.

If you believe Former President Bill “Bubba” Clinton did not know about Jeffrey Epstein’s penchant for engaging in pedophilia, I have 2 bridges that cross the Mississippi River at Memphis to sell you….cheap!

Clinton’s moral turpitude has been in question for a looong time.

Let’s take a stroll down Memory Lane, shall we?

Paula Corbin Jones, a former Arkansas state worker who claimed that Bill Clinton had accost­ed her sexual­ly in 1991 when he was gover­nor of Arkansas, had brought a sexual harass­ment lawsuit again­st the presi­dent. In order to show a pattern of behav­ior on Clinton’s part, Jones’s lawyers questioned sever­al women believed to have been engag­ing in sex  with him. On Jan. 17, 1998, Bubba took the stand, becom­ing the first sitting presi­dent to testi­fy as a civil defen­dant.

During this testi­mony, Clinton denied having had an affair with Monica S. Lewin­sky, an unpaid intern and later a paid staffer at the White House who worked in the White House from 1995–96. Lewin­sky had earlier, in a deposi­tion in the same case, also denied having such a relation­ship. Kenneth Starr, the indepen­dent counsel in the White­wa­ter case, had already received tape record­ings made by Linda R. Tripp (a former cowork­er of Lewinsky’s) of telephone conver­sa­tions in which Lewin­sky described her involve­ment with the presi­dent. Assert­ing that there was a “pattern of decep­tion,” Starr obtained from Attor­ney Gener­al Janet Reno permis­sion to inves­ti­gate the matter.

The presi­dent publicly denied having had a relation­ship with Lewin­sky and charges of cover­ing it up. His advis­er, Vernon Jordan, denied having counseled Lewin­sky to lie in the Jones case, or having arranged a job for her outside Washing­ton, to help cover up the affair. Hillary Clinton claimed that a “vast right-wing conspir­a­cy” was trying to destroy her husband, while Repub­li­cans and conser­v­a­tives portrayed him as immoral and a liar.

In March, Jordan and others testi­fied before Starr’s grand jury, and lawyers for Paula Jones released papers reveal­ing, among other things, that Clinton, in his January deposi­tion, had admit­ted to a sexual relation­ship in the 1980s with Arkansas enter­tain­er Gennifer Flowers, a charge he had long denied. In April, howev­er, Arkansas feder­al judge Susan Webber Wright dismissed the Jones suit, ruling that Jones’s story, if true, showed that she had been exposed to “boorish” behav­ior but not sexual harass­ment; Jones appealed.

In July, Starr grant­ed Lewin­sky immuni­ty from perjury charges, and Clinton agreed to testi­fy before the grand jury. He did so on Aug. 17, then went on televi­sion to admit the affair with Lewin­sky and ask for forgive­ness. In Septem­ber, Starr sent a 445-page report to the House of Repre­sen­ta­tives, recom­mend­ing four possi­ble grounds for impeach­ment: perjury, obstruc­tion of justice, witness tamper­ing, and abuse of author­i­ty.

On Dec. 19, Clinton became the second presi­dent (after Andrew Johnson) to be impeached, on two charges: perjury—in his Aug., 1998, testimony—and obstruc­tion of justice. The vote in the House was large­ly along party lines.

In Jan., 1999, the trial began in the Senate. On Feb. 12, after a trial in which testi­mony relat­ing to the charges was limit­ed, the Senate reject­ed both counts of impeach­ment. The perjury charge lost, 55–45, with 10 Repub­li­cans joining all 45 Democ­rats in voting again­st it; the obstruc­tion charge drew a 50–50 vote. Subse­quent­ly, on Apr. 12, Judge Wright, who had dismissed the Jones case, found the presi­dent in contempt for lying in his Jan., 1998, testi­mony, when he denied the Lewin­sky affair. In July, Judge Wright ordered the presi­dent to pay nearly $90,000 to Ms. Jones’s lawyers. On Jan. 19, 2001, the day before he left office, Presi­dent Clinton agreed to admit to giving false testi­mony in the Jones case and to accept a five-year suspen­sion of his law license and a $25,000 fine in return for an agree­ment by the indepen­dent counsel, Robert W. Ray (Starr’s succes­sor), to end the inves­ti­ga­tion and not prose­cute him.

In a later inter­view, Hillary claimed that Bill suffered child­hood abuse which may have caused him to be a philan­der­er and experi­ence “bimbo eruptions” later in life. She described her philan­der­ing husband as “a hard dog to keep on the porch”.