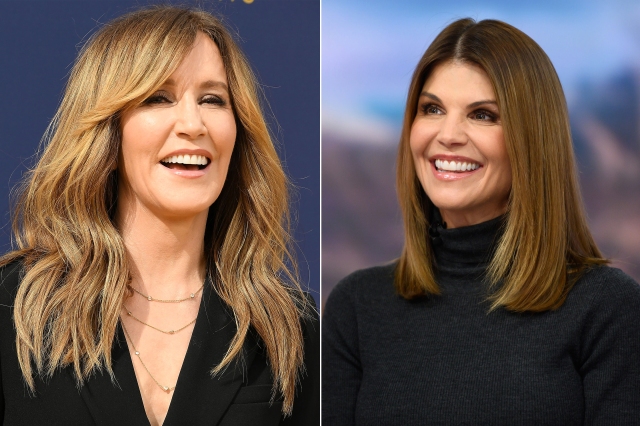 You’ve got gazillions of people following the rules, trying to get in the way they’re told they have to get in because they don’t have money to spread around — and they’re finding out now that the case and system is rigged against them. I’m sorry, since the left has politicized everything, I will point out that it’s leftists that what caught violating the law, gaming the system. Maybe not all of them are. Who knows? We don’t know all the names here.

After a frenzied few hours in which federal authorities made several high profile arrests — and outlined a top-secret investigation into an alleged scam involving rich and famous clients paying millions to a network of counselors and coaches to ensure their privileged children be granted admission to some of the country’s most prestigious colleges — a judge said on Tuesday that jailed actress Felicity Huffman, accused of paying a bribe to help get her daughter into a top school, was eligible for release on $250,000 bond.

A magistrate judge also ordered on Tuesday that the “Desperate Housewives” alum restrict her travel to the continental United States.

Court documents said Huffman, 54, paid $15,000, which she disguised as a charitable donation, so her daughter could take part in the college entrance-exam cheating scam.

The documents stated that a cooperating witness met with Huffman and her husband, actor William H. Macy, at their Los Angeles home and explained to them that he “controlled” a testing center and could have someone secretly change her daughter’s answers. The person told investigators the couple agreed to the plan.

The judge asked Huffman: “I’m not asking you to admit or deny the charges against you but do you understand what the government claims you did?” She replied: “Yes.”

The court appearance came hours after it was revealed that Huffman and fellow Hollywood actress Lori Loughlin were among the boldfaced names in a veritable who’s who of the rich and powerful charged in the case.

The actress, dressed in a black sweatshirt, glasses, and her hair pulled back into a ponytail, looked visibly tired in court on Tuesday as her lawyer argued for her release on her own recognizance because “she is not the kind of person who is going to become an international fugitive over this matter.” The prosecution would not accept that, citing her net worth. Fox News has learned that Huffman and Macy have real estate assets in excess of $20 million dollars and stocks worth around $4 million.

Macy, 69, dressed in a gray jacket and blue jeans, took notes during his wife’s hearing. He looked engaged and focused on the terms of Huffman’s release as they were being read aloud.

Huffman’s defense pushed back after the prosecution requested that the actress not be able to communicate with her husband since he’s a witness in the case. The judge balked at the request and excluded him from known witnesses or subjects with whom she may not be in contact.

The judge ruled Giannulli will be released on a $1 million dollar bond, securing the couple’s home as bond. Giannulli’s attorney said part of the reason they came to this agreement was with the hopes that Loughlin, also indicted in the case, would receive the same bond deal as well as be allowed to travel to Vancouver. The judge also ordered that Giannulli restrict his travel to the continental United States.

Loughlin, who did not appear in court on Tuesday, reportedly has been filming a movie in Vancouver. According to multiple reports, the actress landed at LAX on Tuesday during the court hearing.

A rep for Loughlin did not respond to Fox News’ request for comment.

Federal authorities have also charged college coaches and others in the case.

The racketeering conspiracy charges ensnared coaches at schools such as Wake Forest University, Georgetown and the University of Southern California. Investigators said the coaches accepted bribes in exchange for admitting students as athletes, regardless of their ability.

Investigators said parents would pay a predetermined amount to college entrance consultant William Rick Singer, who then would give the funds to coaches, SAT or ACT administrators.

In other words, gentle readers, the same “smartest people in the room” who live in the Northeast and on the Left Coast, who have been telling us how to live our lives and whom to vote for as President of our country for all these years, have been found to not be the moral arbiters whom they have claimed to be.

As the late, great Claude Rains said in the classic movie “Casablanca”,

These parents of wealth and influence ran a “pay for Play” racket, not unlike the one that their 2016 Presidential Candidate of Choice, Hillary Clinton ran when she was Secretary of state under Barack Hussein Obama (mm mmm mmmm).

Whereas Hillary was charging Foreign Leaders exorbitant amounts paid to her and Bubba’s Clinton Foundation for access to her as Secretary of State, the wealthy parents who have been charged in this massive scandal paid out the wazoo (that’s a medical term) for their precious little spoiled high school graduate to attend a prestigious college such as Stanford or Yale.

Just as the Clintons, the Obamas, and the members of the Far Left Democratic Party up on Capitol Hill who have been making the headlines lately have shown us “little people”, otherwise known as average Americans, out here in America’s Heartland, “rules are for commoners”, not the Elite.

Or, at least that is the way it has been in the past, especially if you are a privileged Liberal from the Northeast or the Left Coast.

Just think of all of those average Americans who had worked hard in high school and who deserved to attend those colleges and could not, because some spoiled Liberal Elite Brat took their place.

You want to know what is scary?

According to Harvard’s Former Dean of their Law School, Professor Alan Dershowitz,

The federal racketeering indictment filed Tuesday in a college admissions scandal in which wealthy parents allegedly paid bribes to get their children into elite universities is the most serious such scandal ever exposed – and may get worse.

The sense of entitlement by the 33 parents charged in these cases is representative of the attitude of the Liberals who live in these areas.

Their moral compasses are askew, but they don’t care, because of their sense of privilege and station in life.

If average Americans had not rebelled against this attitude and their Presidential Candidate of choice which they were shoving down our throats, can you imagine what we would be experiencing as a nation by now?

I don’t even want to think about it.

Thankfully, just as in the case of these 33 parents who got caught, sometimes the good guys win.