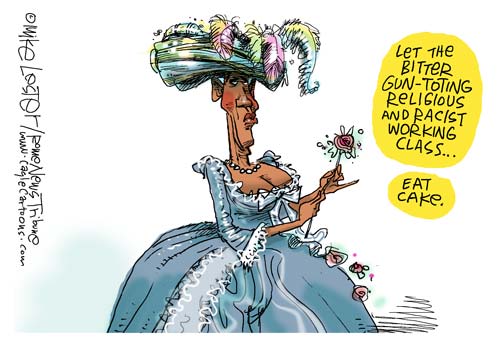 Yesterday, while speaking at an event in Boston, President Barack Hussein Obama (mm mmm mmmm) attempted to correct the lie which he has been telling the American Public over and over again, since he first campaigned for the Presidency: the lie concerning Americans with privately-held Health Insurance Polices being able to keep them with the advent of Obamacare…

Now, if you had one of these substandard plans before the Affordable Care Act became law, and you really like that plan, you were able to keep it. That’s what I said when I was running for office. That was part of the promise we made. But ever since the law was passed, if insurers decided to downgrade or cancel the substandard plans, what we said under the law is that you have got to replace them with quality, comprehensive coverage because that, too, was a central premise of the Affordable Care Act from the very beginning…

So if you’re getting one of these letters [canceling your insurance policy], just shop around in the new marketplace. That’s what it’s for…

For the fewer than 5% of Americans who buy insurance on your own, you will be getting a better deal. So anyone peddling the motion that insurers are canceling people’s plan without mentioning that almost all the insurers are encouraging people to join better plans with the same carrier and stronger benefits and stronger protections, while others will be able to get better plans with new carriers through the marketplace, and then many will get new help to pay for these better plans and make them actually cheaper–if you leave that stuff out, you’re being grossly misleading, to say the least.

Yeah…about that “new marketplace”, Scooter. It’s kind of hard to “shop around” when the cotton-pickin’ website keeps crashing.

While your hench-woman, HHS Secretary Kathleen Sibelius, was on the stand at yesterday’s Congressional Hearing, the darn thing crashed again, leading to what Sean Hannity called “an unfortunate screen shot”, with Healthcare.gov’s Technical Problems page on the left of the screen and Sibelius on the right.

“Glitch-plagued” does not even begin to describe the castastrophe-filled abyss that is healthcare.gov.

Jennie Johnson from Missouri City, Texas, has been trying for “three weeks” to access HealthCare.gov. She eventually decided to take President Obama’s advice and check out her insurance options by phone, but only got a few steps in before being told she had to return to the broken website.

2. “Every day for three consecutive weeks”

David Harrison from Tennessee has attempted to enroll into ObamaCare every day for three consecutive weeks. Not only is he being forced to jump through the glitches to enroll in a health care plan, but some of the plans he is eligible for are more expensive than he was hoping for.

Elizabeth Cohen, a reporter for CNN, writes that for two weeks straight she tried to access HealthCare.gov, only to be greeted by error messages. Cohen even tried logging on at 3 am on Sunday morning, only to be told by the site that the system was down.

Patricia from North Carolina has been “trying for three weeks to see what ObamaCare offers without success.” Her current health plan has been cancelled thanks to ObamaCare, and yet she has not been able to sign on to browse a potential replacement.

Mary Noble, an editor at Politix.com, wrote that “for the last 23 days I’ve tried and abjectly failed to create an account on Healthcare.gov.”

So, with Americans suffering under under his Signature Socialist Legislation, which was rammed down our throats, an American President would be humble and apologetic about the situation, instead of attempting to pass the buck, while admonishing American Citizens to “shop around”.

But, not our Manchurian President.

Americans do not matter to him. His Marx/Alinsky – inspired Political Ideology, which, in turn, fuels his plan to “fundamentally change” the Shining City of the Hill” into just another Third-World Barrio, takes precedence over the health and well-being of American citizens, whom he has sworn to protect and defend from enemies, foreign and domestic.

In the 44th President’s case, it’s hardly a priority to protect a citizenry whom you have nothing in common with.

And, apparently, other Americans are starting to realize what Conservatives have known all along: Obama is for Obama.

A new NBC News/Wall Street Journal survey shows that a mere 42 percent of Americans approve of Obama’s job performance, down five points from a poll conducted in early October. The president’s disapproval rating stands at 51 percent, tying an all-time high for Obama.

The realization of the  freedom-destroying effects of the Marxist Healthcare Law, put into place by the empty suit who occupies Our House at 1600 Pennsylvania Avenue, is definitely having an effect on “The Lightbringer’s” popularity numbers. Light bulbs are coming on in the craniums of even those Low Information Voters, who supported Obama for the last 5 years, as they begin to understand what average Americans here in the Heartland have known all along, concerning their “fallen messiah.”.

All hat. No cattle

During the Congressional hearing yesterday morning, Secretary Sibelius was overheard whining into an open mic,

Don’t do this to me.

That’s what average Americans have been saying for 5 years, Madame Secretary.

And, all we have to say to you and the Low Information Voters who are awakening to the duplicity of the Manchurian President they elected,is

Welcome to the “party”, pal!

6 thoughts on “Obama Told Me, “You Better Shop Around”!”