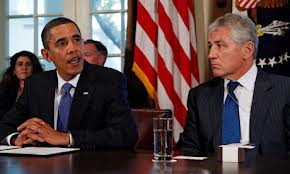 President Barack Hussein Obama (mm mmm mmmm) has presented his choice for United States Secretary of Defense. And, the consensus, from both sides of the aisle, is that ol’ Scooter is either a) unbelievably arrogant,  b) mad with power, or c) just plain nuts.

I choose, d) all of the above.

The New York Times has the story:

Chuck Hagel appears to have weathered a concerted and vocal campaign to derail his chances for defense secretary, with President Obama likely to nominate him as early as next week, administration and Congressional officials said Friday.

Since Mr. Hagel’s name emerged as a candidate for the Pentagon in early December, conservatives, pro-Israel groups and gay rights organizations have raised objections to his views on Israel and Iran, as well as disparaging comments he made about a gay former diplomat.

Administration officials cautioned that Mr. Obama has not made a final decision or offered Mr. Hagel the job. But people on Capitol Hill who know Mr. Hagel, a former Republican senator from Nebraska, have said that all signs were pointing to his selection.

In an interview with NBC’s “Meet the Press” last month, Mr. Obama defended Mr. Hagel from the criticism, saying that while he had not decided on a defense secretary, Mr. Hagel was a “patriot” and that nothing in his record would disqualify him for the job.

The president could announce the selection as early as Monday, officials said, after returning from a vacation in Hawaii. That would come days before a visit to Washington by President Hamid Karzai of Afghanistan, during which he and Mr. Obama are expected to discuss options for American troop withdrawals from Afghanistan.

Mr. Hagel, should he be named by Mr. Obama, will most likely be comfortable with what Pentagon officials say is a White House desire to draw down the remaining 66,000 troops as quickly as conditions allow.

“One of the reasons we’re in trouble in Afghanistan is because we went well beyond our mission,” Mr. Hagel told Robert Nolan, an editor and television producer, in May 2012 for a PBS series on foreign policy. “And now, 12 years later, we’re not sure what our mission is.”

Critics faulted Mr. Hagel for referring to pro-Israel lobbying groups as the “Jewish lobby,” and said he offered inadequate support for Israel and was soft on Iran. He apologized last month for saying 14 years ago that President Bill Clinton’s nominee for ambassador to Luxembourg, James C. Hormel, was not qualified because he was “openly, aggressively gay.”

Just how bad a choice is Chuck Nagel?  He’s horrible.

In an article published on Christmas Eve in The Weekly Standard, titled, “The Hagel Thesis”, Bill Kristol wrote:

…Anti-Israel propagandists are thrilled. Stephen Walt, junior partner of the better-known Israel-hater John Mearsheimer, writes that if President Obama nominates Hagel, it will be “a smart move.” Why? Because, “unlike almost all of his former colleagues on Capitol Hill, he hasn’t been a complete doormat for the Israel lobby.” Indeed, a Hagel pick would “pay back Benjamin Netanyahu for all the ‘cooperation’ Obama received from him during the first term.” Furthermore, Walt writes approvingly, Hagel is “generally thought to be skeptical about the use of military force against Iran.”

Hagel certainly does have anti-Israel, pro-appeasement-of-Iran bona fides. While still a senator, Hagel said that “a military strike against Iran, a military option, is not a viable, feasible, responsible option.” Hagel, one of only two senators who voted in 2001 against renewing the Iran-Libya Sanctions Act, also voted in 2007 against designating the Iranian Revolutionary Guards Corps a terrorist organization and opposed the Iran Counter-Proliferation Act.

Hagel also has a record of consistent hostility to Israel over the last decade. He boasted in 2008 that, unlike his peers, he wasn’t intimidated by “the Jewish lobby.” The next year, he signed a letter urging President Obama to open direct negotiations with Hamas. Later in 2009, he revisited another of his longstanding foreign policy fixations​—​his belief in the good intentions of the Assad regime​—​and told a J Street conference, “I believe there is a real possibility of a shift in Syria’s strategic thinking and policies. .  .  . Syria wants to talk​—​at the highest levels​—​and everything is on the table.”

All of this helps explain why, when Hagel was appointed to an advisory board at the beginning of Obama’s first term, Ira Forman, Obama’s 2008 campaign Jewish outreach director and former head of the National Jewish Democratic Council, acknowledged, “If [Hagel] was taking a policy role, we’d have real concerns.”

Well, secretary of defense is a policy role. President Obama should have real concerns about putting him there. Democratic senators should have real concerns about confirming Hagel if President Obama is foolish enough to nominate him. There are, after all, plenty of Obama-supporting potential nominees for secretary of defense who are qualified for the job. Some have already served in the Defense Department in Obama’s first term, like Deputy Secretary Ash Carter and former undersecretary Michelle Flournoy. The Weekly Standard would expect to differ with such nominees on many issues. But they wouldn’t be out on the fringes like Chuck Hagel.

Why is President Obama tempted by the prospect of nominating Hagel? Because Hagel was a Republican senator. The Obama political types think they’d get credit for bipartisanship by appointing Hagel. And they think they would avoid a confirmation fight because Hagel’s former GOP colleagues wouldn’t dare oppose him: senatorial courtesy, party solidarity, and all that.

It’s a test as well for pro-Israel, anti-nuclear-Iran Democrats. Will they go along with a major policy role for a man they know shouldn’t be in one?

But a Hagel nomination is also a test for Republicans. Does senatorial clubbiness trump the good of the country? Do former party ties trump the importance of having a sensible and mainstream secretary of defense over the next four years?

It is very apparent that Obama is rubbing our squishy GOP Establishments’ noses in it, with the nomination of this RINO Extraordinaire.

It’s a win-win situation for ol’ Scooter. He’s got a Secretary of Defense who is as stupid about Foreign Policy as he is, and, one who shares the same ig’nant “Smart Power!” philosophy:

Alienate our Allies. Embrace our Enemies.

If Boehner, McConnell, and the rest of the Moderate Republicans do not shout this abomination of a nomination down…quickly, they might as well register as Democrats, and get it over with.

Because, at this point, speaking as a member of the ignored Conservative Base, they are acting as if they have more in common with them than us, anyway.

4 thoughts on “Haggling Over Hagel”