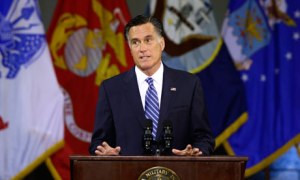 Yesterday, an American Leader gave an excellent, commanding speech on his vision for what our Foreign Policy should be.

And, it sure wasn’t Scooter.

In what his campaign called a major foreign policy address, Romney called for a more assertive use of American influence in the Middle East, Europe, Asia and Latin America.

Romney, speaking before the white-uniformed cadets at Virginia Military Institute, questioned Obama’s handling of the episode in Libya last month in which U.S. Ambassador Chris Stevens and three other Americans were killed after the U.S. consulate in Benghazi came under militant attack.

“The president is fond of saying that, ‘The tide of war is receding,'” Romney said. “And I want to believe him as much as anyone. But when we look at the Middle East today … it is clear that the risk of conflict in the region is higher now than when the president took office.”

Romney’s speech was short on specifics, but in broad terms he laid out his national security priorities before the second of his three debates with Obama, which will be at Hofstra University in Hempstead, New York on October 16 and will include discussion of foreign policy.

Romney’s aim on Monday was to portray himself as having the presidential stature needed for the world stage. He had a similar goal during a trip overseas in July, but that was marred by a series of missteps, including his inadvertent insult of the organizers of the London Olympics.

In calling for a more forceful foreign policy, Romney indicated that he would not rush into armed conflict.

But he accused Obama of a hasty troop withdrawal from Iraq, saying hard-fought gains there are being eroded by rising violence and a resurgent al Qaeda. Obama considers his withdrawal of U.S. troops from Iraq the fulfillment of a 2008 campaign promise, sought by Americans weary of war.

Romney also said he might not be so quick to pull troops out of the unpopular war in Afghanistan. Obama has pledged to end the U.S. combat role in Afghanistan by the end of 2014 as part of NATO’s plan to hand over security responsibility to Afghan forces.

Romney said he would pursue a transition to Afghan security forces by that time but would evaluate conditions there before making a final decision to pull out.

Obama was right to order the mission that led to the killing of Osama bin Laden last year, Romney said, but he charged that other elements of the president’s strategy for the region were weak or ill-advised. Romney pointed to the extensive U.S. reliance on attacks by drone aircraft as “no substitute for a national security strategy for the Middle East.”

Romney, who accused Obama of pursuing a strategy of “passivity” rather than partnership with U.S. allies, is running just behind or even with his Democratic rival in most opinion polls, which have gotten closer since Romney did well in their first debate last week.

Our Brightest and Best, who have to enforce the President’s Foreign Policy know, overwhelmingly, whom they want to be the 45th President of the United States.

Here’s a newsflash: Per militarytimes.com, again, it ain’t Scooter.

For an example of the cockeyed Foreign Policy known as Smart Power!, check this out:

From the pool report, which details a gaggle held by White House spokesman Jay Carney:

-Carney said US congratulates Venezuelan people on its election, while noting the US has its differences with Chavez.

President Obama is on his way to tour Cesar E. Chavez National Monument in California.

UPDATE: From the White House transcript of the gaggle:

Q Speaking of foreign policy, can you react to the election results in Venezuela?

MR. CARNEY: The Venezuelan National Elections Commission has declared that President Hugo Chavez won reelection, I believe roughly 54 to 45 percent, with 90 percent reporting. We congratulate the Venezuelan people on the high level of participation, as well as on what was a relatively peaceful election process. I would note the challenger has conceded the race.

Mr. President, I do not think that you know what that word means.

And, as far as your inept and chaotic Foreign Policy is concerned, therein lies the problem.