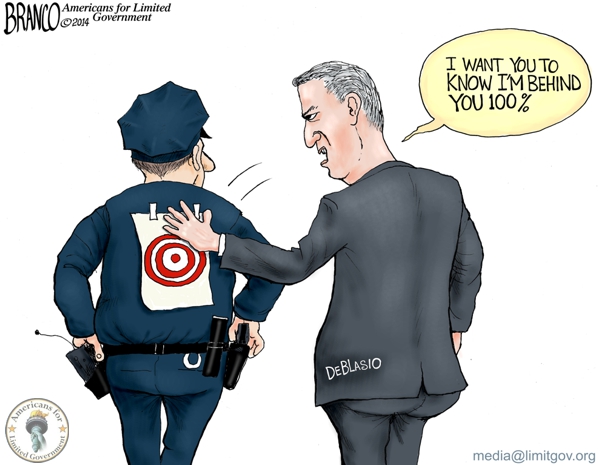 On Saturday, 28,000 Law Enforcement Officers come to New York City to honor…and bury…one of their own.  While there, New York’s Men in Blue let their feelings be known, once again, concerning current Mayor Bill DeBlasio.

Thousands of NYPD cops turned their backs on Mayor de Blasio on Sunday outside a Brooklyn funeral home as he eulogized a murdered NYPD officer inside.

As de Blasio addressed the loved ones of Detective Wenjian Liu in the Aievoli Funeral Home in Bensonhurst, the sea of blue watching the funeral on huge TV screens outside showed their disgust for Hizzoner by turning around as he spoke.

Cops have been furious with de Blasio mainly since the grand-jury rulings involving the deaths of Staten Island dad Eric Garner and Missouri teen Michael Brown, two unarmed black men who died during confrontations with white cops. Neither cop was criminally charged.

The mayor said afterward that he worries about how his son, Dante, who is half-black, might be treated by police because of his race.

The cops say de Blasio’s comment is just another instance in which he has added to the anti-cop sentiment in the city.

Liu and Officer Rafael Ramos were sitting in their patrol car in Bedford-Stuyvesant on Dec. 20 when deranged, cop-hating killer Ismaaiyl Brinsley came up from behind to execute them. Brinsley committed suicide before cops could catch him.

There’s more to the story than that…

… De Blasio and the race-baiting Rev met withPresident Obama and other clergy, cops and pols Monday about “simmering” tensions between the police and minorities across the United States.

Sharpton, a White House regular under Obama, got a prime seat at the table — directly facing the president — during the two-hour session at the Eisenhower Office Building.

Hizzoner, meanwhile, got a seat farther away from Obama.

…Sharpton’s police power play began over the summer at an event at City Hall dealing with the chokehold death of Eric Garner, where he humiliated de Blasio and NYPD Commissioner Bill Bratton by lecturing them on the department’s supposed ills.

“If Dante wasn’t your son, he’d be a candidate for a chokehold. And we’ve got to deal with that reality,” Sharpton said at the time, referring to Hizzoner’s biracial son.

At the Monday meeting, Dante’s name came up again — this time from Obama.

“The president referred to when he met my son, Dante. Well, I can tell you I think every night about my son, making sure he comes home safely . . . We have to make sure all our children are safe, living in justice,” de Blasio said.

Tensions have been rising across New York City as a grand jury nears a decision on whether to indict in the Garner case, but Sharpton refused on Monday to make predictions about any possible fallout from a ruling.

“I could not talk about aftermath when I don’t know what the decision is,” he told The Post.

The issue of leveling government “sanctions” at police departments that violate standards came up at the meeting, he said.

Sharpton had raised the issue after the Trayvon Martin shooting in Florida in 2012.

Obama said the situation was emblematic of a larger issue.

“Ferguson laid bare a problem that is not unique to St. Louis, and that is a simmering distrust that exists between too many police departments and too many communities of color,” he said.

Officials proposed spending $75 million in 2015 to help local police buy the devices as part of a $263 million request by Congress to aid local law enforcement.

As I wrote last week, it’s a funny thing about that word “respect”. It works both ways.

When New York City’s Communist mayor, Bill DeBlasio, prissed around, preening and grandstanding for the cameras with Al Sharpton and the other race-baiters, taking their side in the protests over Brown and Gardner, he quite literally showed his backside to New York’s Finest.

Just as Obama has not seemed to figure out, yet, being a leader of a diverse group of citizens, means just that: leading all of them.

You are actually part of the Establishment, meaning that you have to put your old anti-Establishment Ways in your toy chest with your childhood possessions.

It’s time to be a grown-up, and to know the difference between playtime and reality.

And, when it comes to the lives of two police officers, killed in the coldest of blood, while sitting in their patrol car, that is as real as it gets.

DeBlasio has yet to apologize for his comments and his actions.

Once again, he’s lucky that they just turned their backs on him at their fellow officer’s funeral, instead of giving him a mass one-finger salute.

But, these are Men of Honor, unlike Politicians.

DeBlasio is quickly undoing every good thing that Rudy Giuiliani accomplished as the Mayor of New York City.

It is truly sad that the Mayor of the Big Apple is such a worm.