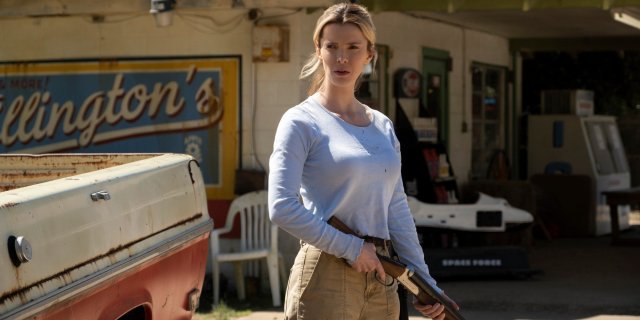 A controversial movie about privileged vacationers hunting “deplorables” for sport is ruffling feathers more than a month before its scheduled release and after tragic mass shootings in El Paso, Texas and Dayton, Ohio.

“The Hunt” is billed as a satire that follows wealthy thrill-seekers taking a private jet to a five-star resort where they embark on a “deeply rewarding” expedition that involves hunting down and killing designated humans. The Hollywood Reporter reported on Tuesday that “Universal is re-evaluating its strategy for the certain-to-be-controversial satire” following the shootings after ESPN reportedly pulled a trailer for the film that had been previously cleared to air on the sports network.

“The violent, R-rated film from producer Jason Blum’s Blumhouse follows a dozen MAGA types who wake up in a clearing and realize they are being stalked for sport by elite liberals,” THR’s Kim Masters wrote. “It features guns blazing along with other ultra-violent killings as the elites pick off their prey.”

“The Hunt” is billed as a satire that follows wealthy thrill-seekers taking a private jet to a five-star resort where they hunt “deplorables” for sport.
According to the Hollywood trade publication, characters in the film refer to the victims as “deplorables,” which is what Hillary Clinton famously dubbed Trump supporters during the 2016 election. The report noted that a character asks, “Did anyone see what our ratf–ker-in-chief just did?”

“At least The Hunt’s coming up. Nothing better than going out to the Manor and slaughtering a dozen deplorables,” a character responds, according to THR.

“Out of sensitivity to the attention on the country’s recent shooting tragedies, Universal Pictures and the filmmakers of The Hunt have temporarily paused its marketing campaign and are reviewing materials as we move forward,” a Universal Pictures spokesperson told Fox News late Wednesday.

DePauw University professor and media critic Jeffrey McCall told Fox News that the movie is “harmful to a culture that surely needs messages of unity and understanding” during the current climate.

“It says something sad about the state of the ‘entertainment’ industry that this movie ever got conceived and produced. Hollywood clearly thinks it is OK to stereotype so-called deplorables and set them up for a hunt,” McCall said. “Thank heavens some sensible outlets are pulling the promotional ads.”

“The Hunt” stars Betty Gilpin and Hillary Swank, who play characters who represent “opposite sides of the political divide,” according to Masters, who added that it was originally titled, “Red State vs. Blue State.”

“The Hunt” is scheduled to hit theatres in September but honchos are reportedly reconsidering amid tragic mass shootings.
Political satirist Tim Young makes a living by poking fun at topical issues but thinks “The Hunt” goes over the line.

“Why would anyone think it’s a great idea to have a movie about hunting down someone who doesn’t agree with them politically? It’s remarkable to me that the left blames Donald Trump’s rhetoric for violence, then literally spends millions to normalize the killing of people based on politics,” Young told Fox News.

“We’re told over and over again by the left, especially in Hollywood, that this country is more divided than ever and we need to come together… is this what they mean by it? Come together to murder your neighbors that you don’t agree with? This film is sick and shows just how hateful the left has become,” Young added.

ESPN did not immediately respond to a request for comment.

At least two trailers for the film are online but it remains unclear if Blumhouse Productions will proceed with other planned advertisements.

“A high-level insider says top executives want to stand by Blum, one of the studio’s most prolific and successful producers, as well as filmmaker Craig Zobel, and see the project as a satire addressing an issue of great social importance. But this person says plans could change ‘if people think we’re being exploitative rather than opinionated,’” Masters wrote.

The Hollywood Reporter reported on Tuesday that “Universal is re-evaluating its strategy for the certain-to-be-controversial satire.”

“This certainly shows Hollywood for what it really is — demented and evil. At a time when journalists try to blame President Trump for every act of violence in the world, wannabe Tinseltown terrorists are making sick murder fantasies about right-wingers,” Media Research Center vice president Dan Gainor told Fox News.

A trailer that was published by The Daily Mail reveals that the victims are from areas that typically vote Republican, while a hunter declares “We pay for everything, so this country belongs to us.”

“While some trailers for the film have been pulled, there’s an internal debate deliberating the film’s next steps,” Daily Mail’s Lauren Edmonds wrote. “But decisions will need to come fast, as there’s a promotional blitz planned in September.”

“The Hunt” is scheduled to be released on Sept. 27.

“The executives at Universal and those even willing to promote this or run ads for it should know better than to promote political violence,” Young said.

The intolerant arrogance of Liberal Hollywood knows no bounds.

The Hollywood “Elite” on the Left of the Political Spectrum who voted for Hillary Clinton to be our next President of the United States of America, continue in public to show their hindquarters, while throwing the longest temper tantrum that the world has ever seen over the results of an American Presidential Election, that happened almost three years ago.

These self-proclaimed activists, are once again making a lie out of the claim that they have made for years that they are the most tolerant…and “gifted” among us.

In fact, these sore losers remind me of the hysterically sobbing children that you hear in every Walmart across the country.

This epic meltdown by those who are paid handsomely to entertain us is a direct result of an isolated ignorance of average Americans’ desire to rid ourselves of those in the Halls of Power who told us repeatedly that they knew what was best for us and “who we were”, while their actual mission was to turn America into a Third-World Barrio in their quest to make us a Socialist Paradise.

All during the Presidential Campaign, the Democratic Party, along with those in “Showbiz”, through their minions in the Main Stream Media, assured us that it was a foregone conclusion that Hillary Clinton would be our 45th president.

There is a reason for that.

This arrogance which I have referred to, allows them to actually produce a demeaning, horrible piece of garbage like “The Hunt” and blow off the evil demented storyline of it as “satire”.

That is as disingenuous as when Facebook Trolls posting Andy Borowitz’s “satirical” articles from The New Yorker as “real news”.

Just like their fellow Modern American Liberals who run the Democratic Party, the disconnected “dancing monkeys” in Tinsel Town and the Big Apple just can not accept the fact that the overwhelming majority of Americans living between the coasts, the ones responsible for the election of President Trump are sick and tired of their overbearing arrogance, anti-Americanism, and Liberal Intolerance which they attempt to force upon average Americans as “art” while attempting to lecture average Americans as to why America and the President are positively gauche and awful.

At this point, all their incessant national temper tantrum over Trump’s Presidency and political correctness is doing, is making them look like fools and to remind us of how disconnected their beliefs are from average Americans.

I don’t remember any of us average Americans asking them for their opinion as to how we should vote, do you?

And, I certainly do not remember them being appointed as the arbiters of what is “Hate Speech” and what words are allowed to be communicated freely among Americans.

Perhaps, if they got their noses out of the air and actually associated with their families and former friends “back home”, instead of kissing each other’s hindquarters at the latest premiere or “social event”, perhaps they and reality would not have taken divergent paths, and they would conduct themselves and  comport themselves like those Hollywood Legends before them, who served their country during World War II, doing whatever they could to help America defeat fascism.

Now, these pampered ,self-righteous, oblivious Lightweights are all proponents of the “New Fascism” being practiced by the Modern Democratic (Socialist) Party.

And, they see no problem with insulting and being condescending to the average Americans who “pay their salaries” by watching the garbage being produced out of Hollywood.

As we say down here in the part of America’s Heartland, known as Dixie…

It just don’t make no sense.