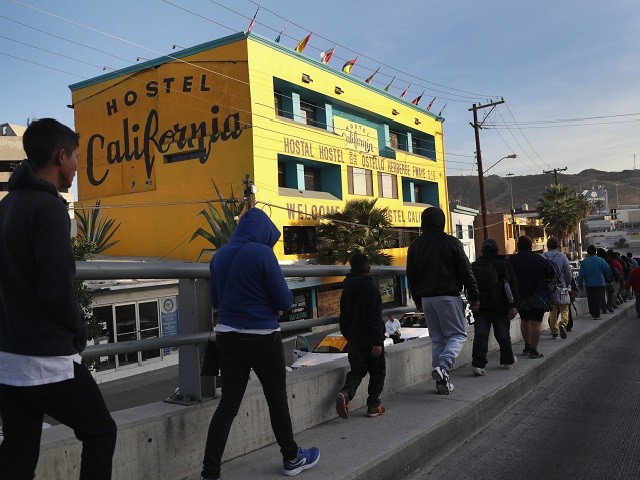 In blunt contrast to the warm reception thousands of migrants received as they made the arduous journey through Central America to Mexico – getting food donations and well wishes from locals – the nearly 3,000 people who reached the Mexican border with California in recent days have been met with marked hostility.

The majority of migrants, who have been on foot for more than a month, are sleeping on a dirt baseball field at an outdoor sports complex in Tijuana by the newly-fortified barbed wire fence that separates Mexico from the United States. A truck parked on the street is providing showers for women, while the men are told to use newly established outdoor showers near the field.

Reports of insults being shouted, rocks being hurled and even physical fist-fighting has escalated over the weekend.

The reception has left many in limbo – afraid to return to their homeland, which for the vast majority is Honduras, yet unwelcome in Mexico and uncertain if their U.S. asylum requests will be granted. The U.S is said to be processing around 100 claims per day.

Tijuana Mayor Juan Manuel Gastelum has referred to the arrivals as “bums” and questioned whether a referendum in the city of 1.6 million is needed to determine whether or not they should be allowed to stay.

The Mexican Interior Ministry announced Friday that just under 2,700 Central American migrants have applied for asylum in Mexico under a program that was launched late last month that pledged to provide them with work and living permissions faster.

Yet officials anticipate that the migrant caravan will soon swell in excess of 10,000 – and will need to be housed for more than six months – which the Mexican government claims it lacks the resources to do.

Alden Rivera, the Honduran ambassador in Mexico, told reporters during a visit to the sports complex on Saturday that he is working with local officials to secure additional funds.

“These are our people, we want to do what we can for them,” he said. “In Honduras, we respect human rights.”

Yet his visit also drew visceral responses from many who blame the U.S.-backed Honduran government for their own dire financial and security situation – which prompted them to make the journey in the first place.

Despite a lull in covering the issue post-midterms, President Trump again expressed his grievances at the new arrivals in a tweet on Friday.

“Isn’t it ironic that large caravans of people are marching to our border wanting U.S.A. asylum because they are fearful of being in their country – yet they are proudly waving their country’s flag,” he wrote. “Can this be possible? Yes, because it is all a BIG CON, and the American taxpayer is paying for it.”

In anticipation of the caravan reaching the U.S. periphery, authorities put in place new coils of razor wire and Border Patrol officers are manning in full-force, stretching down through the beach strip of Border Field State Park alongside Tijuana’s famed Playas de Tijuana.

And while many locals have expressed anger and frustration at the new arrivals, scores of others have shown their support and sympathy. Church groups and other Tijuana locals are donating food and clothes to the new arrivals, and remain on standby as hundreds more pour into the already crowded facility by the day.

“In Honduras, we respect human rights.”

Then why are your citizens attempting to force their way into OUR country, instead of staying in yours?

As I’ve said from the beginning, something just does not smell right.

And it’s not the “migrants” personal hygiene.

All of the sudden, out of nowhere, caravans began forming down in Central America to basically attack our Southern Border.

Sure, they claim that they want to seek asylum but they have passed places where they could do that all along their travels.

Their journey has been documented by the Main Stream Media, which more and more includes Fox News, which seems to be beginning to visibly slant to the Left.

Back in October of 2015, Europe began to experience an out-of-control Muslim Migration from Syria. Ben Shapiro, writing for Breitbart News, asked and answered the following question…

Who Are These Refugees? That competition to accept refugees would be fine if we knew that the refugees plan on assimilating into Western notions of civilized society, and if we knew that they were indeed victims of radical Muslim atrocities. Unfortunately, we know neither. It is deeply suspicious that major Muslim countries that do not border Syria refuse to take in large numbers of refugees, except for Algeria and Egypt.

…These fears are not without merit, as even Obama administration officials have acknowledged: back in February, director of the National Counterterrorism Center Nicholas Rasmussen called Syrian refugees “clearly a population of concern.” FBI Assistant Director Michael Steinbach explained, “Databases don’t [have] the information on those individuals, and that’s the concern. On Tuesday, State Department spokesman John Kirby told CNN’s Wolf Blitzer that terrorist infiltration was “a possibility. I mean, you can’t, you can’t dismiss that out of hand.” He then added, “Obviously, if you look at those images though, it’s pretty clear that the great majority of these people are innocent families.” (Sound familiar?)

Actually, images show a disproportionate number of young males in crowds of refugees. And those images reflect statistical reality: according to the United Nations Human Rights Commission, Mediterranean Sea refugees are overwhelmingly male: just 13 percent are women, and just 15 percent are children. The other 72 percent are men. Compare that population to the refugees in the Middle East from the same conflicts: 49.5 percent male, and 50.5 percent female, with 38.5 percent under the age of 12. Those are wildly different populations.

All of the video footage taken by the media of the “caravans” show that the overwhelming majority of these current “migrants” to our Southern Border are young males, as well.

Of course, our Liberal friends in D.C. and on the Cable News Programs are telling us that this is a “Humanitarian Crisis”.

However, I believe that it is more likely that certain wealthy Democratic Party Donors are financing the transportation of these people to our Southern Border in order to “Rock The Vote”.

As the political graft and corruption of the “recounts” of the last two weeks since the Midterm Elections have shown the nation, nothing is beneath those who want to “radically change” our Constitutional Republic…

…”By any means necessary”.