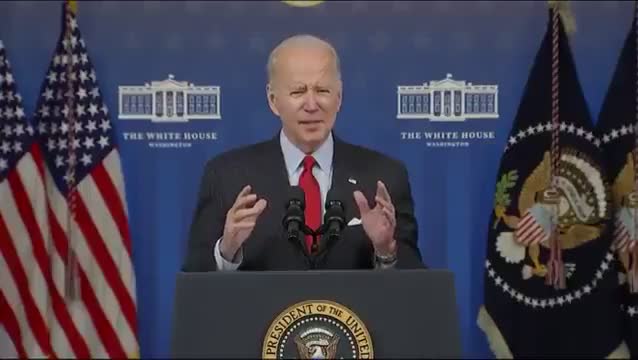 President Biden appeared to read technical instructions from his teleprompter during a Tuesday speech about rising gas prices.

“Because of the actions we’ve taken, things have begun to change,” Biden said.

“End of quote,” Biden added before moving on to his next sentence.

Biden’s aside came during a speech about rising gas prices and the economy, during which he also delivered a Thanksgiving message.

“I want you to know how grateful I am to serve as your president,” he said. “And I promise you that I’ll never stop working to address your family’s needs. And together we’re going to face challenges. We’re going to face them honestly. And that we’ll keep building this economy around hardworking folks who built this country. Happy Thanksgiving, and may God bless you, and may God protect our troops.”

Biden later told the press he had to leave to help out at a soup kitchen and took no questions, prompting one reporter to shout, “When will you answer our questions?”

The Biden administration has repeatedly faced accusations that the president is not in charge of his communications. In September, the White House abruptly cut the feed of Biden’s briefing on wildfires with federal and state officials in Boise, Idaho.

In August, the president’s audio feed was cut as he was about to respond to a reporter’s question on his administration’s military withdrawal deadline from Afghanistan.

The White House also cut Biden’s feed in March when he said he was “happy to take questions” while speaking to Democratic lawmakers at a virtual event.

Biden has dementia and because of that, his handlers must make things as simply as possible in order to attempt to fool the public into thinking that Joe is capable of performing his Presidential Duties.

Who is/are the puppet master(s) behind the living breathing dementia-riddled mannequin that is Joe Biden?

A lot of fun has been had at Biden’s expense over the fact that he is losing his war with dementia.

However, in terms of the safety of our country’s citizens and our nation’s continued existence, it is definitely not a laughing matter.

Any American who paid attention during the campaign soon figured out that Biden has some serious mental and physical health issues.

It was one thing to over look his inappropriate behavior during the Obama Presidency when he was just the Vice-President and Obama, Susan Rice, and Valerie Jarret were running the show, anyway.

They are still running the show!

I am certain that it has been difficult for them to cover for Biden’s compromised state.

They knew that he was a doddering old fool even before the Democratic Primaries.

However, when the time came for Biden to start appearing during the Democrat Primaries and then, the Presidential Campaign itself, it was quite obvious that “Lunch Bucket Joe” was shy a potato chip or two.

Now, the President of the United States of America reminds average Americans of their relatives who live in nursing homes whom they have not seen in a while because they cannot bear to witness them deteriorating like Biden is.

HIs wife, “Dr.” Jill Biden and the rest of his Handlers can try as hard as they can to hide his condition.

But, unfortunately, as we have noticed, Joe is declining physically as well as mentally.

Vice-President Kamala Harris and the Democrat Elites know that Joe’s time in the Oval Office is limited.

That is why she has been distancing herself from him by taking trips.

Even she knows that Biden is responsible for the situation in Afghanistan brought about by his pulling our troops out and closing up Bagram before he got the American Civilians and our allies out.