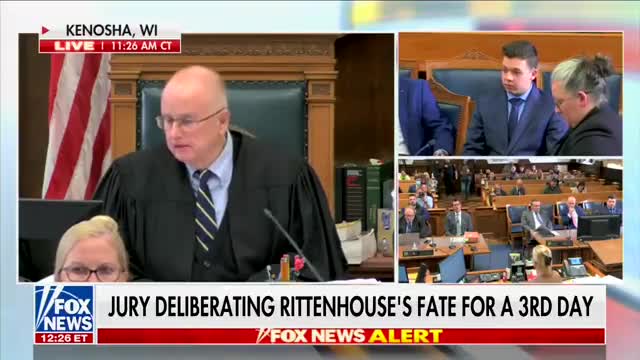 MSNBC got caught red handed sending their goons to harass a jury in a high profile court case. Not only is the media refusing to tell the truth about Kyle Rittenhouse, but they are going out of their way to ensure that he doesn’t receive a fair trial.

The Wisconsin judge presiding over the case against Kyle Rittenhouse on Thursday banned staff from MSNBC from entering the Kenosha courthouse for the remainder of the trial.

In a brief statement before the court Thursday, Judge Bruce Schroeder addressed an incident in which a person who identified himself as an employee for MSNBC allegedly followed a sealed bus with blocked out windows as it left the courthouse to transport jurors to an undisclosed location.

“I have instructed that no one from MSNBC news will be permitted in this building for the duration of this trial,” Schroeder said. “This is a very serious matter and I don’t know what the ultimate truth of it is, but absolutely it would go without much thinking that someone who is following the jury bus – that is an extremely serious matter and will be referred to the proper authorities for further action.”

The man spotted following the bus identified himself as James J. Morrison – and he told investigators he was instructed to follow the vehicle, Schroeder added. The judge said Morrison claimed to be working under the supervision of an MSNBC producer based in New York.

“Last night, a freelancer received a traffic citation. While the traffic violation took place near the jury van, the freelancer never contacted or intended to contact the jurors during deliberations, and never photographed or intended to photograph them. We regret the incident and will fully cooperate with the authorities on any investigation,” an NBC spokesperson told Fox News.

The Kenosha Police Department said in a tweet Thursday, “Last night a person who is alleging to be affiliated with a national media outlet was briefly taken into custody and issued several traffic related citations. Police suspect this person was trying to photograph jurors.”

“This incident is being investigated much further,” police added. “There was no breach of security regarding the jury, nor were there any photographs obtained. This investigation remains active and open, no further information.”

As I was driving home from work last night, I was listening to Sean Hannity’s Fox News Program on Sirius FM 114, listening to a montage of remarks by the wild-eyed Leftists at MSNBC concerning Kyle Rittenhouse and the Judge.

The Liberal Kooks at MSNBC  are trying desperately to try Rittenhouse in the court of public opinion.

There are a couple of problems with that strategy.

First, Far Left Democrats are still a minority in America.

Second, MSNBC only has around 2 viewers left.

For MSNBC to be so desperate and so ignorant of the law as to believe that they would get by with following a bus full of the Jurors from the Rittenhouse Case for the purposes of identifying them, or “doxing” them, demonstrates that they are not broadcast journalists, they are political activists.

The producer in NYC ,whom the MSNBC Stooge had taken orders from, no doubt told him to get pictures of as many of the jurors as he could for the purpose of intimidating the jury so that they would bring in a guilty verdict.

What Judge Schroeder did was to “throw them out of the game”.

Objective Journalism was still being taught in the Broadcast Journalism Course which I took.

Nowadays, objectivity has been thrown out the window.

It has been replaced by advocacy and political activism.

The Main Stream Media has become the Vanguard of the Far Left Democrat Party.

MSNBC was following that van in order to intimidate those Jurors into finding Kyle Rittenhouse guilty and to achieve the political goal of the Far Left to control the thoughts and actions of average Americans from cradle to grave.

However, the best laid plans of mice ,men, and Marxists often go awry.