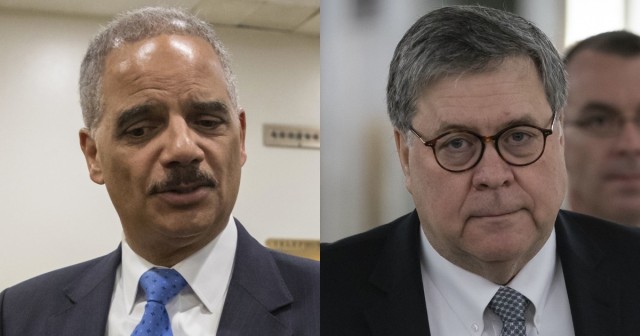 Anyone remember when Obama interfered with Israel’s election?

And got a Border Patrol agent killed because of Fast/Furious

And lost all that money on Solyndra

And promised Putin he'd be more flexible after he was elected

And divided the country

Former Attorney General Eric Holder told Fox News on Tuesday that current Attorney General Bill Barr “is paying a price” and sacrificing his credibility by spearheading U.S. Attorney John Durham’s ongoing probe into possible misconduct by the intelligence community at the outset of the Russia investigation.

Holder also remarked separately that it was a “reality” that Republicans will “cheat” in the 2020 elections by trying to “move polling places” and “a whole variety of things” — prompting Republicans to dismiss his “outlandish and baseless accusations.”

Holder’s comments came a day after The New York Times reported that President Trump had privately pressed Australia’s leader to help Barr in that probe. However, a letter obtained by Fox News showed that Australia had proactively reached out to Trump in May to offer assistance after Trump publicly told reporters he would direct Barr to contact a variety of countries as part of the probe.

“The whole thing that the attorney general is involved in is highly unusual,” Holder said. “Ordering an investigation of our intelligence and law enforcement agencies when there was already an investigation underway by the inspector general.”

A DOJ official stressed to Fox News on Monday that this has been a routine procedure in diplomacy and that Barr would not usually reach out to his direct counterpart in another country unilaterally. Instead, there would be an introduction of sort, made at the head-of-state level.

“Mr. Durham is gathering information from numerous sources, including a number of foreign countries. At Attorney General Barr’s request, the President has contacted other countries to ask them to introduce the Attorney General and Mr. Durham to appropriate officials,” DOJ spokeswoman Kerri Kupec said in a statement.

And a senior Australian diplomat told Fox News: “After the president said what he said — we initiated the contact. There was no pressure — we acted in order to help.”

A Trump administration source echoed those comments. “The countries have been helpful,” the source said. “There was no pressing required.”

Holder acknowledged that it’s not unprecedented for presidents to introduce their attorneys general to other countries’ law enforcement agencies.

“I wouldn’t say it was standard but I wouldn’t say it was unprecedented,” Holder said. “But involving the president in a Justice Department investigation is something that would be reserved for the most important investigations that the Justice Department would do — usually those that would have a direct impact on the national security. More often than not, the contact with other governments goes from attorney general to the attorney general’s counterpart in the other country. You don’t involve heads of state in these matters unless the consequences are really significant.”

Pressed on whether Durham’s investigation — which began back in May into alleged misconduct and improper surveillance of the Trump campaign in 2016, as well as whether Democrats were the ones who’d improperly colluded with foreign actors — rose to that level of significance, Holder said the probe was simply unnecessary.

“Again, the question I have for this new investigation is what does it do that the inspector general wasn’t already doing?” Holder asked. “It seems to be this is duplicative in a lot of ways. And I think kind of unnecessary. But, the attorney general has made that determination and I think is paying a price for it — both in terms of questioning whether he’s acting as the president’s lawyer as opposed to the attorney general, and then it has a negative impact on the Justice Department as well.”

Holder added: “I think when people of this country look at the Justice Department and think it is in some ways politicized, that has a negative long-term impact on the department. FBI agents have to testify in trials all around this country, and to the extent a person looks at an FBI agent and thinks that person serves in a politicized agency, that could make a person — a juror for instance — think the FBI agent is not telling the truth, in a way we traditionally have.”

…”The question is: Is there a predicate?” Holder asked. “That’s how you do investigations. Is there a basis to think there was something that went wrong — some basis for us to order the investigative resources of the United States to be involved. … On the basis of what I know, it seems there is not that predicate.”

Asked if an ongoing impeachment inquiry against Trump would help or hurt Democrats, Holder demurred.

“I’m not sure that anyone can really gauge that,” Holder said. ” I’m not sure if this is going to help Democrats or hurt Democrats. But I think it’s the right thing to do.”

In a separate interview on Monday, though, Holder suggested Democrats might have a tough election year — for a head-turning reason.

Holder went on to argue that Republicans were able to suppress voting because of the Supreme Court’s decision to strike down part of the Voting Rights Act in 2013.

Let’s face it, boys and girls.

Of course, Former Attorney General Eric Holder is going to be all for trying to impeach President Trump.

It takes the heat off of his Former Boss Barack Hussein Obama, Hillary Clinton, and everyone else from the preceding Administration involved in what will probably be revealed as the biggest political Scandal in American History, “Spygate” and the resulting “Silent Coup”.

Holder is as crooked as a dog’s hind leg. According to JudicialWatch.org, he

…was a senior partner in a prestigious Washington D.C. law firm (Covington & Burling) that represented more than a dozen Yemeni terrorists held at the U.S. military prison in Guantanamo Bay Cuba. While Holder was a senior partner the firm employed a number of radical attorneys to provide the Islamic extremists with thousands of hours of free legal representation, according to a news report.

Another highlight in Holder’s resume is that he orchestrated Bill Clinton’s shameful last-minute pardons, including that of a fugitive financier and a pair of jailed domestic terrorists. In fact, shortly after the pardon scandal, Holder predicted that his public career was over. Under his leadership the DOJ has been embroiled in a number of high-profile scandals, including a gun-running operation (Fast and Furious) in which weapons were sold to Mexican drug cartels. One was later used to murder a federal agent. Judicial Watch has sued the DOJ to obtain records involving the operation.

And, let us not forget how he and his boss purposefully worked to divide the nation and protect the guilty during the Ferguson Riot and the riots thereafter, while supporting the professional race-baiters.

Of course, Holder staffed his Department of (In)Justice with lawyers from his old law firm.

What we are witnessing play out before us is a political party attempting to undo the results of a previous Presidential Election by threatening impeachment because all of their other Machiavellian Plans have failed and the extent and treasonous intent of these plans is about to be public by the current Attorney General.

The crimes of Joe and Hunter Biden are as underwhelming as Madonna’s vocal range in comparison to all of the unethical activities which occurred during the Obama Administration, such as Hillary Clinton’s Pay-for Play scheme involving using her and her husband, Bubba’s “Foundation” to secure “funds” from foreign leaders in exchange for attention from the sitting Secretary of State, who just happened to be Mrs. Clinton herself.

Of course, there’s E-mailgate, Benghazigate, and other little “bumps” in the smooth sailing of the Obama Administration.

But, we mustn’t talk about all of that, boys and girls, that would ruin the Democrat’s narrative which is being perpetuated by the MSM. According to them, Trump MUST BE IMPEACHED…even though he has done nothing impeachable.

After all, a man of such impeccable ethics as the Former Defense Attorney for Radical Islamic Terrorists and Former Attorney General of Barack Hussein Obama, Eric Holder, says so.

I’ve got to go hurl.