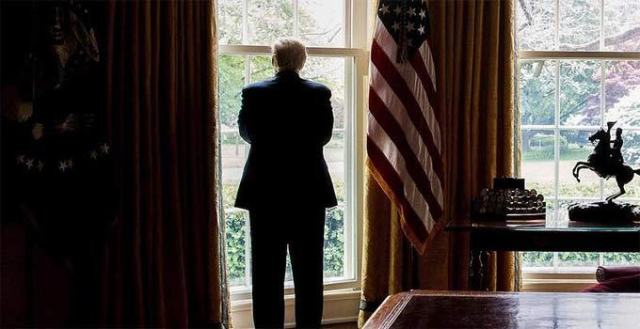 The Republican National Convention kicking off Monday will be a four-day celebration of President Trump – and a visceral four-day condemnation of Democratic nominee Joe Biden and his party.

Coming off a week during which Democrats used their quadrennial confab to hammer the president’s handling of the coronavirus pandemic and warn that another four years of Trump in the White House would threaten the nation’s democratic foundations, Trump is promising to counter the message with a positive vision of “American greatness.”

Trailing the former vice president in the national public opinion polls – and more importantly also down by single-digit margins in many of the key general election battleground states that will decide the White House contest – Trump is working to create game-changing moments that can alter the long-standing dynamic in the 2020 presidential race.

“Where Joe Biden sees American darkness, I see American greatness,” the president said Friday at a gathering of the Council for National Policy, which is composed of leading Republican donors.

“Four straight days attacking America, as a racist, horrible country that must be redeemed,” Trump said as he painted a portrait of the Democratic gathering as the “darkest, gloomiest” convention. “Joe Biden grimly declared a season of American darkness, but look at what we’ve accomplished, until the plague came in, and look, we’re doing it again.”

The president pledged to showcase “what we’ve accomplished,” touting his tenure as “the most successful period of time in the history of the country.”

Testing out themes for the convention, Trump urged supporters to “reject the anger and the hate of the Democrat party” and argued that “no party can lead America that spends so much time tearing down America.”

Noting that the theme of the four-day gathering is “the great American story,” Republican National Committee (RNC) Chairwoman Ronna McDaniel told Fox News’ Bill Hemmer that “this is going to be a very positive uplifting convention.”

While Democrats faced criticism that their convention was short on policy and specifics, Vice President Pence promised plenty.

“We’re going to talk about what this president has done to revive this economy, rebuild the military, strengthen the constitutional liberties with conservatives to our courts at every level,” Pence said Friday in an interview on “Fox & Friends.”

The vice president claimed that Democratic nominee Joe Biden and his party have “been overtaken by the radical left and while they didn’t talk about it very much, their agenda is higher taxes, socialized medicine, open borders, abortion on demand.” Pence promised to make the Democrats’ agenda “clear to the American people next week.”

And pointing to the three-month-long nationwide protests over police brutality against minorities and systemic racism — as some of those protests have escalated into violent riots — Pence vowed that “we’re going to bring law and order to our cities. You’re going to hear about that next week.”

As we watch the beginning of the 2020 Republican National Convention, we find ourselves as a nation still dealing with a pandemic and riots in Democratically-held major cities across the country while being locked in a battle of wills between a president who believes that the right of Americans to feel safe in a country built with the blood, sweat, and tears of those who have died to keep us free trumps the desire of those who wish to enter our country illegally and the Machiavellian Plans of a Far Left Political Party who wish to use them to “radically change” America.

As has been documented during President Trump’s first term by my fellow writers on spartareport.com, the American Left remain positively apoplectic over the  President’ denying of  illegal entry to our Sovereign Nation by building a wall along our Southern Border.

Why are those who claim to be our “public servants” so adamant about going against the wishes of the American people to be safe in our own country?

According to a man who was an American Legend, it all has to do with the way Liberals look at things…

…I always thought I was a liberal but I came up terribly surprised when I found I was a right-wing conservative extremist…I have always listened to every human being I’ve ever met about how I should feel.  But this so-called new liberal group… they never listen to your point of view and they make a decision as to what you think and they’re articulate enough and in control of enough of the press to force that image out for the average person.  For some reason, maybe it’s these pictures, they have not been able to do that with me…it hasn’t affected my career in popularity in spite of the fact that they’ve tried to make them do it.  There isn’t a hell of a lot we can do to change human behavior.  We keep making laws to try to change human behavior but we can’t do it…You’re being conned into Keynesianism and socialism now but it isn’t going to stop the selfishness of human behavior.  It isn’t going to stop the greed.  If you take $20 and give a dollar to every son of a b!tch in the room, you come back a year later one of the b@st@rds will have most of the money.  It’s just human nature.  We’re never gonna whip it with a lot of laws.

As communication gets better and you make people conscious of somebody in trouble, starving or something like that, the average person will help…I think there are people who try to affect a thinking where they know more than some other son of a b!tch and try to pull a false impression on what human nature is.  We’ve proven we go back to hope at the first opportunity…and bam they’re out there ready to grab it.  So we are optimistic; we have to be optimistic.  What else would we be if you lose optimism?” –  John Wayne

The negativity and bitterness of the Modern American Liberals to whom the Duke was referring has been on display for the entire world to see, ever since the night of November 8, 2016, when reality threw a bucket of cold water in their faces, putting them on notice that average Americans were tired of their failed political philosophy and their perpetually morose opinion about the Greatest Country on the Face of the Earth.

Ever since President Donald J. Trump took office and for 8 long years under his predecessor, Barack Hussein Obama, there has been constant chorus provided by the Nattering Nabobs of Negativism, now known as Modern American Liberals, concerning how uncaring, how bigoted, how xenophobic, how narrow-minded, and how just plain awful and stupid average Americans are to continue to love this country, to honor its flag, and to continue to hold dear the America Legacy of Traditional Faith and Values.

For proof of this, please check out the protests during the Confirmation Hearings for Supreme Court Associate Justice Brett Kavanaugh, in which Liberals were bussed to Capitol Hill in order to not only disrupt those hearings but intimidate Republican Senators.

Luckily, the overwhelming majority of those of us who live between the coasts did not live our lives of the past 3 years and 8 months like the mindless lemmings whom I have named the “New Bolsheviks”.

The rugged individualism of previous generations of Americans flows through our veins. The American “Can-Do” Spirit has taken us from the bottom of the Ocean to the surface of the moon.

The overwhelming majority of Americans will stand by one another in times of crisis, as shown through the outpouring of support throughout this year’s Chinese Coronavirus Pandemic.

The intestinal fortitude that is our heritage as Americans…along with that Still, Small Voice which still resides in each and every one of us, will continue, I pray, to guide our nation, and spur us on, to stay vigilant and protect our American Freedom, just as my Parents’ Generation did, against the Axis of Evil.

It is that same Divine Spark which leads our Best and Brightest as they protest and serve our nation’s interests in all corners of the globe. It is also found in our First Responders and the men and women of Law Enforcement who are willing to give their lives to protect our municipalities against the violent Marxist Anarchists an homicidal maniacs who are feeling emboldened by the lack of opposition by the Democratic Party.

I thank God that we have an AMERICAN PRESIDENT who is not afraid to support them and to take the stand he has for our nation’s safety.

The Great Communicator, President Ronald Reagan, summarized what I have been trying to say better than I ever could.

In 1964, in his famous stump speech, “A Time for Choosing”, The Great Communicator said,

It’s time we asked ourselves if we still know the freedoms intended for us by the Founding Fathers. James Madison said, “We base all our experiments on the capacity of mankind for self government.”

This idea — that government was beholden to the people, that it had no other source of power — is still the newest, most unique idea in all the long history of man’s relation to man. This is the issue of this election: Whether we believe in our capacity for self-government or whether we abandon the American Revolution and confess that a little intellectual elite in a far-distant capital can plan our lives for us better than we can plan them ourselves.

You and I are told we must choose between a left or right, but I suggest there is no such thing as a left or right. There is only an up or down. Up to man’s age-old dream–the maximum of individual freedom consistent with order — or down to the ant heap of totalitarianism.

As we enter the final two months of the 2020 Presidential Campaign Season, it will be up to us to continue what was begun on the night of November 8, 2016 and continue the fight to MAKE AMERICA GREAT AGAIN.