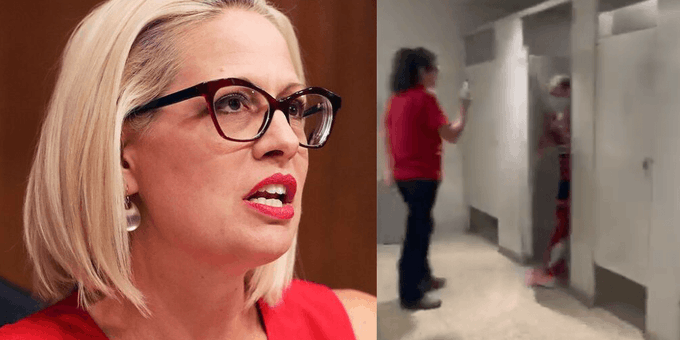 Sen. Kyrsten Sinema was confronted by immigration activists who followed the senator from the classroom where she teaches at Arizona State University to the bathroom while demanding the Arizona Democrat take action on a “pathway to citizenship.”

“We knocked on doors for you to get you elected. Just how we got you elected, we can get you out of office if you don’t support what you promised us,” one of the activists said to Sinema in the video that was recorded with a phone.

The activists first confronted Sinema at her ASU classroom, then followed her down the hall as the senator went into the bathroom and shut the door of a stall. Nevertheless, the activists continued to voice their demands from inside the bathroom, including a demand that she support President Biden’s “Build Back Better” agenda and legislation that would provide a pathway to citizenship for illegal migrants.

“We need the Build Back Better plan right now,” one activist said.

“I was brought here to the United States when I was three years old and in 2010 my grandparents both got deported because of S.B. 1070,” another activist said. “And I’m here because I definitely believe that we need a pathway to citizenship.”

Sinema did not engage in a discussion with the activists in the video footage, instead ignoring the group as she exited the stall and washed her hands.

Florida GOP Rep. Matt Gaetz weighed in on the video, sharing it to social media with the caption “#DeportBlanca.”

The video comes on the same day another group of activists confronted Sen. Joe Manchin at his houseboat in Washington, D.C., demanding the West Virginia Democrat drop his opposition to his party’s $3.5 trillion spending bill.

Both Sinema and Manchin have expressed opposition to the legislation, dealing a blow to Democrats who cannot afford a single defection in the evenly split Senate.

So, the two Democrats who dared to break away from the Fat Left Hive-Mind are both verbally abused by “activists” on the same day.

Coincidence? I think not.

The problem that these “Political Activists” are facing is the fact that they remain in the minority.

The majority of Americans disagree with them.

Otherwise, the #FJB Movement would not be breaking out all over the country during college football games, concerts, the Ryder Cup, and NASCAR Races.

If you try to talk to a Liberal about this New Fascism, they will deny that there is any fascism going on at all. In fact, they will tell you that this is “the will of the people” and “White Supremacists” are responsible for our divided nation.

They have no “home training”, either.

These “spoiled brats”, like those who are behind pushing the failed Political Ideology which they seek to replace our Constitutional Republic with, do not care about the “Will of the People”, but, rather, they are intent on implementing and enforcing their Far Left Political Ideology, resulting in a “Tyranny of the Minority”, which we are seeing play out, as they attempt to bully and strike fear into average Americans and “moderate” Democrats alike, in order to receive “FREE STUFF” bestowed upon them by the “benevolent masters” of the Far Left Democrat Party.

These “activists, in their immature, ego-driven rage, do not comprehend our nation’s Constitution, which they firmly believe is an antiquated “Dead ” document, with no more worth than a normal everyday piece of paper.

That Sacred Document, our United States Constitution, gives each of us the right, including the average Americans who live between the coasts and who oppose the “Build Back Better” Bill, to speak our minds and be heard.

It gives those protestors that right, too…but, not at the expense of others, through intimidation and threats like the fascist communists of Lenin’s Revolution, whom they are seeking to emulate through their attempts to circumvent the Constitution of the United States of America.

Their actions are far from noble. They are the actions taken by miserable little cowards who simply cannot accept that the majority of Americans do not believe the way that they do.

It is also called FASCISM.

If they do not like it here, they are free to leave.

And, don’t let the screen door hit ya where the Good Lord split ya.

One thought on “Sen. Sinema Accosted by “Political Activists” in ASU Bathroom Because She is Against Democrats’ $3.5 Trillion “Build Back Better” Bill”