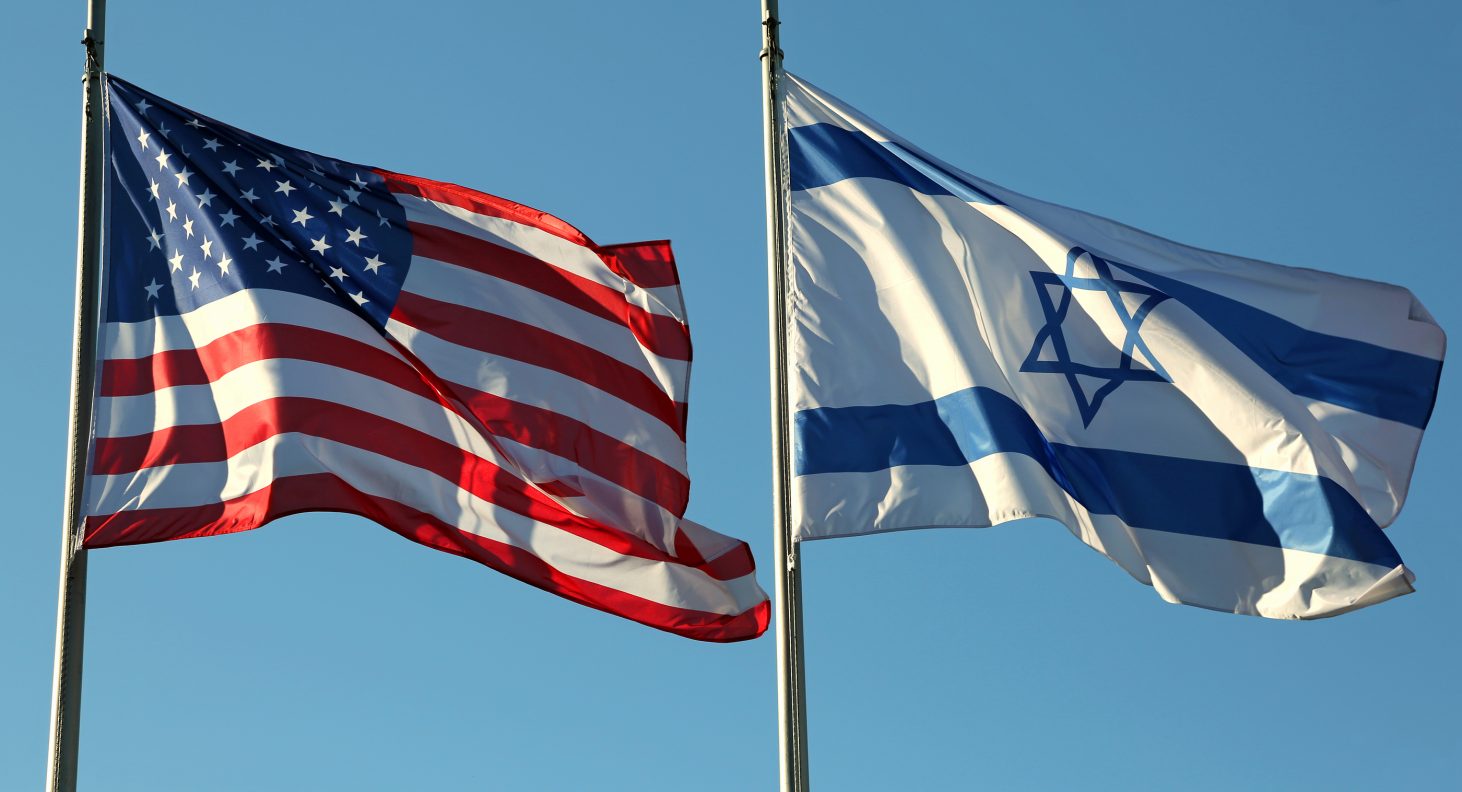 Hezbollah & Hamas know that they're about to be flush with cash, so their efforts to undermine Middle East stability, the Abraham Accords, & Israel’s security will continue.

Appeasement of Iran is destabilizing the Middle East & it's shocking that Dems don’t understand this.

The Israeli military said Thursday that it had deployed air and ground troops within the Gaza Strip to battle the Hamas terrorist group, which has been launching rocket barrages since Monday.

Israel had been retaliating with air strikes, but the ground attack marks another major escalation in what authorities were already describing as the largest clash between Israelis and Palestinian militants since 2014.

And at least three additional rockets were launched by unknown persons out of Lebanon, the country to the north, according to the Israeli Defense Forces.

Israel has taken credit for killing more than a dozen Hamas military figures and razed a pair of high-rise towers in airstrikes amid the country’s fierce military offensive in the Gaza Strip.

.More than 100 Palestinians, including 27 children, have been killed in the recent fighting, Gaza’s Health Ministry said.

A total of seven people have been killed in Israel, including a soldier and a 6-year-old boy.

As a result, the State Department is discouraging Americans form traveling to the region.

The Palestinians are trying to return to their own “country”. A country which never existed.

The term “Palestine” (Falastin in Arabic) was an ancient name for the general geographic region that is more or less today’s Israel. The name derives from the Philistines, who originated from the eastern Mediterranean, and invaded the region in the 11th and 12th centuries B.C. The Philistines were apparently either from Greece, Crete, the Aegean Islands, and/or Ionia. They seem to be related to the Bronze Age Greeks, and they spoke a language akin to Mycenaean Greek. Their descendents, still living on the shores of the Mediterranean, greeted Roman invaders a thousand years later. The Romans corrupted the name to “Palestina,” and the area under the sovereignty of their city-states became known as “Philistia.” Six-hundred years later, the Arab invaders called the region “Falastin.”

Throughout subsequent history, the name remained only a vague geographical entity. There was never a nation of “Palestine,” never a people known as the “Palestinians,” nor any notion of “historic Palestine.” The region never enjoyed any sovereign autonomy, remaining instead under successive foreign sovereign domains from the Umayyads and Abbasids to the Fatimids, Ottomans, and British.

During the centuries of Ottoman rule, no Arabs under Turkish rule made any attempt to formulate an ideology of national identity, least of all the impoverished Arab peasantry in the region today known as Israel.

The term “Palestinian,” ironically, was used during the British Mandate period (1922-1948) to identify the Jews of British Mandatory Palestine. The Arabs of the area were known as “Arabs,” and their own designation of the region was balad esh-Sham (the province of Damascus). While some Arab nationalist writers, and coffee-shop intellectuals in Cairo or Beirut, developed the concept of Arab nationalism in large part as a response to Zionism, the terms “Palestine” and “Palestinian” were used in their traditional sense as geographic designations, not as national identities.

In early 1947, in fact, when the UN was exploring the possibility of the partition of British Mandatory Palestine into two states, one for the Jews and one for the Arabs, various Arab political and academic spokespersons spoke out vociferously against such a division because, they argued, the region was really a part of southern Syria, no such people or nation as “Palestinians” had ever existed, and it would be an injustice to Syria to create a state ex nihilo at the expense of Syrian sovereign territory.

During the 19 years from Israel’s victory in 1948 to Israel’s victory in the Six-Day War, all that remained of the UN’s partitioned territory to the “Arabs” of British Mandatory Palestine were the West Bank, under illegal Jordanian sovereignty, and the Gaza Strip, under Egyptian rule. Never during these 19 years did any Arab leader anywhere in the world argue for the right of national self-determination for the Arabs of these territories. A “Palestinian” nation and “Palestinian” people had not yet been invented.

Article 24 of the PLO’s [Palestine Liberation Organization] original founding document, the PLO Covenant, states: “This Organization (the PLO) does not exercise any regional sovereignty over the West Bank in the Hashemite Kingdom of Jordan, in the Gaza Strip or the Himmah area.” For Arafat before the Six-Day War, Palestine was Israel. It was not the West Bank or the Gaza Strip — because the West Bank and the Gaza Strip belonged to other Arab states, and the inhabitants of these areas were not numbered among the Palestinians whose “homeland” Arafat sought to “liberate.” The only “homeland” for the PLO in 1964 was the State of Israel. However, in response to the Six Day War, the PLO revised its Covenant on July 17, 1968, to remove the operative language of Article 24, thereby newly asserting a “Palestinian” claim of sovereignty to the West Bank and Gaza Strip.

This ploy was revealed, perhaps inadvertently, to the West in a public interview with Zahir Muhse’in, a member of the PLO Executive Committee, in a March 31, 1977, interview with the Amsterdam-based newspaper Trouw:

“The Palestinian people does not exist. The creation of a Palestinian state is only a means for continuing our struggle against the state of Israel for our Arab unity. In reality today there is no difference between Jordanians, Palestinians, Syrians and Lebanese. Only for political and tactical reasons do we speak today about the existence of a Palestinian people, since Arab national interests demand that we posit the existence of a distinct “Palestinian people” to oppose Zionism. For tactical reasons, Jordan, which is a sovereign state with defined borders, cannot raise claims to Haifa and Jaffa, while as a Palestinian, I can undoubtedly demand Haifa, Jaffa, Beer-Sheva and Jerusalem. However, the moment we reclaim our right to all of Palestine, we will not wait even a minute to unite Palestine and Jordan.”

[Yasser] Arafat himself said the same thing, on many occasions. In his authorized biography (Terrorist or Peace Maker, by Alan Hart), he is quoted saying: “[T]he Palestinian people have no national identity. I, Yasser Arafat, man of destiny, will give them that identity through conflict with Israel.”

But such admissions did not stem the enthusiasm with which these fictions were greeted by Western leaders. Within a few years, the USSR’s invention of the fictitious narrative of Palestinian national aspirations and rights of self-determination created the facade of morality and legitimacy that the terrorists needed in order to curry favor with the European Union, the United Kingdom, and the United States.

HAMAS (an acronym for Harakat al-Muqawamat al-Islamiyya, which is Arabic for “Islamic Resistance Movement”) is an Islamic fundamentalist group founded on December 14, 1987. As a single Arabic word rather than an acronym, “Hamas” means “zeal.” The organization’s founders were seven leading members of the Muslim Brotherhood: Ahmed Dassin, Abdel Aziz Rantisi, Ibrahim al-Yazuri, Sheikh Salih Shihada, ‘Isa al-Našhar, Muhammad Shama’a, and ‘Abd al-Fattah Dukhan. Hamas, in a sense, grew out of a 1985-86 Brotherhood movement — in which Ahmed Yassin was involved — that resolved to pursue its goal of degrading and ultimately destroying Israel by means of civil disturbance.

Describing itself as “one of the wings of the Muslim Brother[hood],” Hamas’s avowed purpose is “liberating Palestine” from its Jewish “oppressors,” whose very presence in the Middle East Hamas considers an affront to Muslims’ rightful sovereignty over the region. Hamas is best known for using violent methods — including suicide bombings against Israeli military and civilian targets — as part of its long-term strategy to destroy Israel and replace it with an Islamic Palestinian state. The U.S. State Department, Canada, Japan, Israel, and the entire European Union have named Hamas as an Islamic terrorist organization.

Anti-Semitism is the norm in Marxism in all of its forms, including “Democratic Socialism”.

Anti-Semitic groups tend to gravitate toward each other finding solace and kindred spirits in their shared hatred of the Jewish people.

For those of you who are old enough to have actually studied history before the Liberals started revising it, the world has bore witness to this phenomena before.

A socialist political party in a developed nation joined forces with Islamists before, based on their mutual hatred of Jews.

You may remember this. They were the National Socialist Party of Germany, otherwise known as the Nazis.

They caused the mass extermination of millions of European Jews, the Holocaust which gives Congresswoman Tlaib “a calming feeling”.

The political philosophies which the Modern Democrats are now embracing are the anti-thesis of whom they claim to be.

The false equivalencies which have been thrown about, for the last few decades all over the cable news channels and the internet by Liberal Pundits, paid and unpaid, trying to justify the murderous cowardly actions of the Palestinian Terrorist Organization, Hamas, boggle the mind of any rational, well-informed American.

While Israel has been one of our nations staunchest allies since their birth as a nation in 1948, Hamas, who took over for the Palestinian Liberation Organization, hates our ever-loving guts, and would behead every single American, man or woman, adult or child, without any regret whatsoever. Because to them, we are infidels, and “The Great Satan”, against which they are waging a “Holy Jihad”, not to mention the fact that Israel is our closest ally.

For Liberals, like the members of the “Squad”, and the rest of the Democratic House to support murders and to advocate for a “nation” which never even existed is nothing but an exercise in stupid, dangerous naiveté for the sake of a political ideology…

…and proves continuously that denial is not just a river in Egypt.