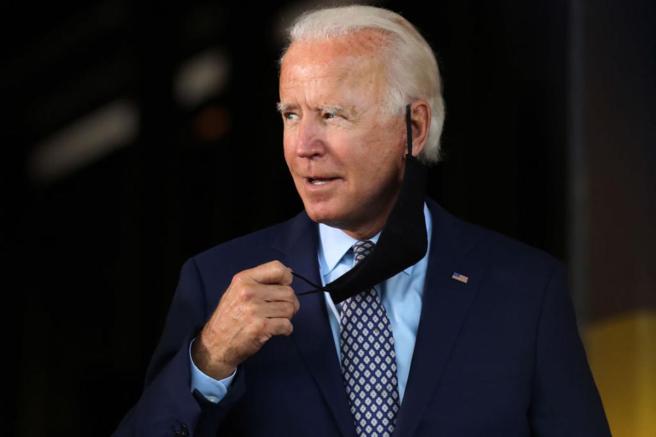 “We hold these truths to be self-evident. All men and women created by — you know, you know, the thing.” – Presumptive Democratic Presidential Candidate Joe Biden

Presumptive Democratic presidential nominee Joe Biden returned to his childhood hometown in Pennsylvania on Thursday during a trip where he proposed spending $700 billion on American products and research – in the hopes of bringing back millions of jobs lost by an economy flattened by the coronavirus pandemic.

The former vice president unveiled his populist plan during a speech at a metal works factory in Dunmore, Pa., just minutes from his childhood home in Scranton.

His proposal – called the “Build Back Better” plan – also seeks to create 5 million new jobs and is the first of four economic proposals Biden is expected to roll out over the coming weeks.

“Let’s use this opportunity to take bold investments in American industry and innovation, so the future is made in America, all in America,” Biden emphasized.

“When the federal government spends taxpayers’ money, we should use it to buy American products and support American jobs,” he added.

The American-centric proposals spotlighted by Biden will compete in this year’s White House race with the “America first” agenda long pushed by President Trump, who has emphasized protecting American workers and re-energizing domestic industries in decline while moving away from free trade and a global economy.

“If I am fortunate enough to be elected president, I’ll be laser-focused on working families, the middle-class families I came from here in Scranton, not the wealthy investor class. They don’t need me. But working families do,” he stressed. “We must reward work as much as we rewarded wealth, but now we just reward excessive wealth.”

“I do not buy for one second that the vitality of American manufacturing is a thing of the past,” Biden said. He also touted his longstanding close ties to union workers, saying, “I had an uncle who said, ‘Joey, you’re labor from belt buckle to shoe sole.’ Well I’ve taken pride in that.”

The first part of the former vice president’s proposal is a $400 billion investment by the federal government to purchase American products such as cement, concrete, steel, and other materials to rebuild the nation’s crumbling infrastructure.

The second part is a $300 billion investment in research for new technologies, such as electric vehicles, artificial intelligence, and 5G.

Biden’s plan also calls for new tax breaks and credits for small manufacturers – including those run by minorities and women – and would levy penalties on companies who take federal money and then move their investments overseas. The campaign says that Biden will also push federal investments toward overlooked parts of the country that have not received government help.

Biden’s proposals appear to be an acknowledgment of the political success the president has enjoyed pushing his “America First” agenda. Trump’s victory in the 2016 presidential election was in part due to his promises of bringing back American jobs and re-inflating flagging industries. And as president, he’s waged an aggressive trade war with China and slapped tariffs on other nations, including longtime allies.

The president’s reelection campaign has slammed Biden for the slow economic recovery from the Great Recession during Biden’s tenure as President Obama’s vice president.

Back in 1988, Joe Biden was running for President as a Democratic Primary Candidate.

Biden later admitted that he should have said that he was “paraphrasing” Kinnock when he said those remarks. Later, he was later accused of using statements from the late Robert F. Kennedy as his own in another speech. It was also reported at the time that he either “quoted or paraphrased” John F. Kennedy and Hubert Humphrey “without credit.”

Sleepy Joe also admitted that he plagiarized while writing a paper in law school.

And now, as the presumptive 2020 Democratic Presidential Candidate, Sleepy Joe Biden has attempted t plagiarize the campaign slogan and strategy of President Donald J. Trump which helped him to win in 2016.

There is one problem with Biden’s strategy: No one believes him.

He has had decades in Washington to do what he is claiming that he will do if, God forbid, he is somehow elected president.

Biden, like the rest of the “Moderate Liberals”, an oxymoron if there ever was one, has totally joined in lockstep march with the rest of the Far Left Marxists in the Democratic Party.

Because of his obvious mental and physical deterioration, Biden will not be able to mentally or physically handle the herculean task of being the President of the United States of America.

And, if you believe that the Far Left Democrats are actually going through on a promises which mirror Donald Trump’s successes which they despise as much as they despise America, then I have a free pair of tickets to go see the Chicks waiting for you in Bubba Wallace’s NASCAR Garage.

To propose a a plagiarized campaign strategy like this for a loser of a candidate like Sleepy Joe Biden is embarrassing, even for the arrogant out-of-touch Democrat Elite.

Biden told the Main Stream Media in 1988, after being nailed as a plagiarist, that

That was an understatement.