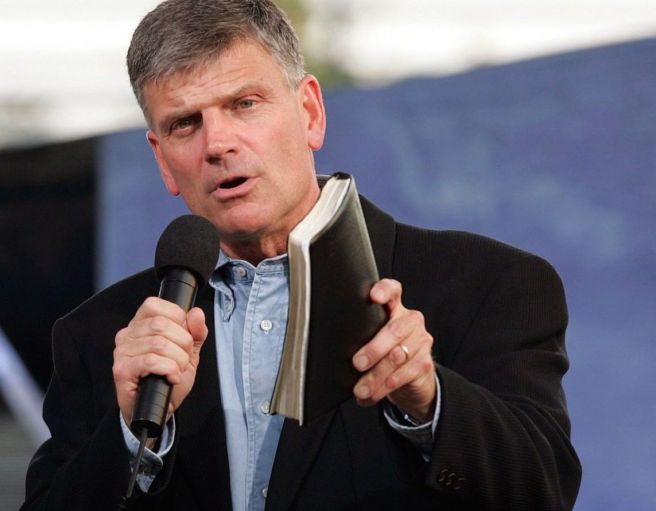 Political correctness does not legislate tolerance; it only organizes hatred. – Jacques Barzun

The Charlotte Observer reports that

Facebook is apologizing to evangelist Franklin Graham for banning him from posting on the site for 24 hours last week, a Facebook spokesperson told The Charlotte Observer on Saturday.

It was a mistake to ban Graham over a 2016 post he made on the site, and a mistake to have taken down the post, the spokesperson said.

Facebook has restored the 2016 post and will apologize in a note to the administrator of Graham’s Facebook page, according to the Facebook spokesperson, who agreed to speak only on background, meaning without the spokesperson’s name.

A member of Facebook’s content review team — the team has 15,000 members — had mistakenly decided the post violated Facebook’s policy that bans “dehumanizing language” and excluding people based on sexual orientation, race and other factors, according to the spokesperson and Facebook’s written policy.

“Why?” Graham asked in a Facebook post on Friday after he said he was banned from posting anything on the site for 24 hours last week. “Because of a post from back in 2016 about North Carolina’s House Bill 2 (the bathroom bill). Facebook said the post went against their ‘community standards on hate speech.’ Facebook is trying to define truth.”

In his post, Graham said the social media giant is “making the rules and changing the rules. Truth is truth. God made the rules and His Word is truth. Actually, Facebook is censoring free speech. The free exchange of ideas is part of our country’s DNA.”

“He says the NC law #HB2 to prevent men from being able to use women’s restrooms and locker rooms is going ‘backwards instead of forwards,’” Graham said in his 2016 post, referring to Springsteen. “Well, to be honest, we need to go back! Back to God. Back to respecting and honoring His commands.”

In March 2016, the General Assembly passed HB2, also known as the “bathroom bill.” HB2 reversed a Charlotte ordinance that extended some rights to people who are gay or transgender, The Charlotte Observer reported at the time. Then-Gov. Pat McCrory signed the measure into law the same night.

As anyone who has been on Social Media Platforms such as Twitter and Facebook has noticed, writers who espouse Conservative Political Viewpoints have been given “time-outs” or have even been “shadowbanned” in increasing since Donald J. Trump was elected President.

Now, whether these “Time-outs”, like Rev. Graham experienced, or the outright bannings, such as Alex Jones’ and others are some form of retaliation for the election of Donald J. Trump as President by the Liberal Owners and Management of these Social Media Platforms, we can only guess.

However, since the election of President Donald J. Trump, the effort to silence Conservatives has gotten so extreme that Liberals have harassed Republican Politicians in restaurants and even elevators, in an effort to intimidate them into remaining silent of issues which the Liberals want their way in.

Why are Modern American Liberals so afraid of Conservative Thought and Free Speech?

Is it possible that this head-on rush by the Far Left Democratic Party to immerse themselves and our Sovereign Nation in the Marxist Theory-inspired Political Philosophy of Democratic Socialism has caused them to emulate those who were responsible for the original Russian Revolution, some 100 years ago?

Just like their predecessors a century ago in a land far away, these “New Bolsheviks” are using any means necessary to shut down any and all opposition to their effort to “radically change” America into something that it was never meant to be.

And, the classification of a Christian’s right to quote the Bible as “Hate Speech” certainly is an example of what I am taking about.

As Americans, it is our Constitutional Duty to oppose the “dying of the light” of individual liberty, including our Freedom of Speech.

Ray Bradbury, legendary Science Fiction Writer, penned a book in 1953 about the dangers of censorship, titled Fahrenheit 451, in which you can read this pertinent thought…

The very real Political War being waged against our basic rights as Americans must not go unopposed.

It is time for average Americans to take our places along the wall of this fortress of individual liberty and freedom known as the United States of America.

As we did on the night of November 6, 2018, it is time once again for “The Elite” as President Trump has called us, to make our voices known.