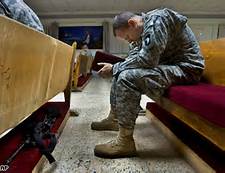 I remember my ex-brother-in-law, Dave. My late step-sister met him at the USO in Memphis during the Vietnam War. David was a Polish Catholic from outside of Detroit, a Navy guy who received his training in the computers of the day, while in service to our country. When he got out, they got married and moved to Dearborn (now Dearbornistan), Michigan, where he got a job with Burroughs. I remember Dave, because he was always good to me, even though I was just a runt kid, 15 years younger than him. I remember him cleaning his service rifle, sitting on the living room floor of our house, and, making sure it was empty, allowing me to to hold it. At the time, I thought that was the coolest thing I had ever done.

I also remember John. John was a friend of my sister’s, who stayed with us, because of problems at home. As I have related before, my folks were the ones who all my sister’s friends would talk to when they had trouble at home. John was great guy, as well, who wound up enlisting and serving in that “crazy Asian War”, as Kenny Rogers and Mel Tillis once referred to it in song.

I have related before about my own Daddy and my Uncles, and their service in World War II. I have also had friends that served over the years, and one who is still serving in the Air National Guard.

All of these men were/are Patriots. They enlisted out of a duty to God and Country.

“God and Country”. Now, there’s a phrase that you may not hear much anymore.

You see, the 44th President of the United States, Barack Hussein Obama, (our Lord and Savior, as Jamie Foxx referred to him) is on a Crusade to remove Christianity and any reference to the God of Abraham and Isaac, from our Armed Forces.

Within the past year, the Pentagon was caught teaching soldiers that the Christian Evangelical “American Family Association”, was a “Terrorist” Organization, needless to say, after Americans gave them “H – e – double hockey sticks” about that stupidity, they had to stop that training class.

After that, the Obama Administration, through their operatives at the Pentagon, decided to remove the phrase “So help me God” for the oath that Americans take, when they enlist in the United States Air Force. It is now “optional”.

Additionally, there have been instances of Air Force Personnel getting in trouble for sharing their faith.

The non-military Liberal Bureaucrats, who are in charge of our fighting men and women, issued a policy called “Air Force Culture, Air Force Standards,” published on Aug. 7, 2012.

Section 2.11 of the policy requires “government neutrality regarding religion.”

Military leaders were admonished not to use their position to “promote their personal religious beliefs to their subordinates or to extend preferential treatment for any religion.”

This policy and the removal of God from the Air Force Oath are the result of meetings with Mikey Weinstein.

Who is this clown, you ask?(You probably did not use the word “clown”, but I did. And, I’m holding my temper.)

Weinstein is the head of an organization, known as the “Military Religious Freedom Foundation”.

Established in 2006, the Military Religious Freedom Foundation (MRFF) describes itself as “a watchdog group” that is “dedicated to ensuring that all members of the United States Armed Forces fully receive the Constitutional guarantees of religious freedom to which they and all Americans are entitled …” The organization’s primary objective is to eradicate the religious bias and “coercion” that it deems prevalent among high-ranking Christian members of the U.S. military. Toward that end, MRFF functions as “a clearinghouse for violations reported by military and civilian personnel,” offering “complete anonymity” to all complainants.

Headed by retired Air Force lawyer Michael L. “Mikey” Weinstein, MRFF declares: “At a time when the United States is encouraging greater religious freedom in Muslim nations, it is imperative [sic] upon America to show by example that religious pluralism is a viable and preferred option. Any sign of hypocrisy in United States policy … toward the free exercise of religion within the military makes it more difficult to convince others to follow our nation’s chosen path.”

(a) Blatant displays of religious symbolism on military garb.

(b) Placement of a biblical quotation above the door of the Air and Space Basic Course classroom.

(d) Attempts by missionary organizations to train active-duty military personnel to evangelize their subordinates and peers.

(e) Military leadership openly discussing their commitment to bring religion into the military.

Notwithstanding the disclaimer, MRFF states: “[S]erious violations were committed by prominent figures featured on the organization’s ten-minute promotional video. … [S]everal members of military leadership appear in the video, dressed in full uniform openly discussing their personal connection to Jesus and how they make this connection part of the work they do in their professional capacity each day. {They] state that, among other things, with the help of Christian Embassy, they hold bible studies while on duty in the workplace, many times in their offices.”

Ohhhh….how horrible. Why…morality and ethical behavior may break out at any moment!!!

I have some news for Obama, Weinstein, and the rest of “the smartest people in the room”:

GOD IS NOT AN “OPTION”. HE IS A NECESSITY.

A General by the name of George Washington thought so, too.

General Washington took the oath as our first President in New York City on April 30, 1789. When Chancellor Livingston swore Washington in as Commander-in-Chief of the Army and Navy, Washington added four words to the Constitutionally prescribed oath:

So Help Me God

If it was good enough for Washington and every United States President thereafter, why does Obama was to do away with those four words?

Is this Administration threatened by the Sovereignty of God?

4 thoughts on “The War Against Christianity: Obama and America’s Armed Forces”